The Mural Arts Program began in 1984 as part of the Anti-Graffiti Network. Jane Golden, who beforehand worked co-founder and director of the Los Angeles Public Art Foundation, was hired to fight against the Graffiti throughout the city. To do so she convinced the Graffiti artists and writers to put their talent to painting murals instead.

The approach that was taken by Mural Arts Program helped to limit graffiti and vandalism all while creating murals and beautifying the city. They did not only solve the issue but the city as a whole benefited from it immensely and used art to unite communities. Jane Golden is responsible for creating 2,000 murals with the program. It was 1996 when Ed Rendell, who was the mayor at the time, officially stated that the Anti-Graffiti Network was to be converted into the Mural Arts Program.

Since 1984 the Mural Arts Program has developed and is now not just a fight against graffiti but also a way to help people find a voice and tell their story through what they paint. They are responsible for over 3,600 murals in Philadelphia and for the overall transformation of Philadelphia’s walls to the blossoming of culture. They have created the largest collection of public art and now use the murals to attract tourists on the Mural Arts Tours. 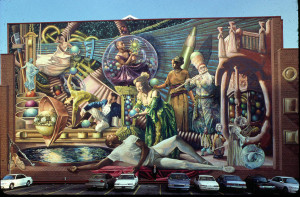