First off, before I even get into the awesomeness of the film itself, I want to praise the marketing team for a wonderful promotional campaign. They created several astonishing and visually eye catching images,  especially the ones highlighting the districts like the one below and the incredibly detailed website The Capita.pn that is well worth a visit. 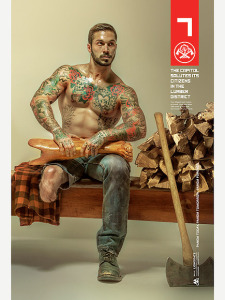 The film itself was an excellent treat for those that have been searching for an worthwhile cinematic journey lately. Mockingjay had strong performances, stunning effects and a well-kept pace leaves the audience ‘hungry’ for more. The film picks up where Catching Fire left off — Katniss and her allies, among them the long lost district 13, are no longer competing in a gladiator fight against each other, instead a much more dangerous battle altogether- a war with the tyrannical and ruthless Capital, which will stop at nothing to regain its power over the districts. In a current world where a youtube video can, quite literally, spark a revolution, it’s worth noting the power of propaganda as demonstrated several times in this film on both sides of the conflict.

As previously stated I felt the performances were all strongly delivered her The always- good Jennifer Lawrence showed a more uneven side of Katniss, struggling to adapt in a new world without the same singular purpose as the previous films and having great responsibility sprung onto the girl who started it all off by simply trying to save her sister. While having less screen time this film, Josh Hutcherson is able to give a wonderfully nuanced and more subtle performance as Peeta Malik, the poor boy with the bread who has suffered greatly at the hands of the Capitol. Other returning characters like Finnick, Heavensbee, Haymitch and Beetee were able to show a few new sides while new characters like the icy President Coin, left us in mystery to some of her intentions.

While it was a little sad to see the great comic relief that is Effie Trinket without her fabulous outfits, she was still able to steal every scene she was in. An often overlooked force in the movies, but is always entertaining is Donald Sutherland as President Cornelius Snow who nails the head on the wall with whatever he needs; the loving caregiver, the cold villain or the ruthless enforcer he provides them all in a wonderfully sinister character.

Paragraph more into the real-world connection HERE. (SLA media is looking further into this and will be publishing an article on it soon)

This movie is definitely not for one who hasn’t seen the previous films (or at least read the books) but for fans of the series there’s a lot to enjoy, even as a movie in general, and while I can’t speak for the accuracy to the book I would find it hard for there to be too many inconsistencies/ changes. If you can I’d strongly urge you to “volunteer as tribute” to see the next exciting installment of the Hunger Game series currently in theaters.