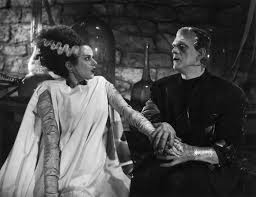 When was the last time you watched a horror movie? Was it at home? or in the theatres? If so, then you’ve might have or have not been scared watching it. Of what you saw was what today’s movies has to offer, entertainment in horror. No matter where you watched, you may be surprised to know, what you watched is just the same like 65 years ago.

“No waay,” you’re thinking. “movies today are more developed and realistic looking than they were then”. Okay, so maybe the blood and gore looks a little less fake. But the themes in horror movies are exactly the same. They’re the same because they have this effect upon people, that makes them feel “shivery of freight” in some form of way, for those who carry the same feelings that have been felt before. In which no matter how great or little the fear is, it is still fear.

In the 1950’s, movies were often popular and mainly monster themed, such as The Revenge Of Frankenstein, or It Conquered The World, where there would always be this disastrous creature that’d destroy humanity or the Earth. Which relates to movies today, because there’s always someone or something, there to cause havoc to make horror, such as the movies The Lazarus Effect, Innocence and Crimson Peak.

It is said by Douglas E. Winter, who is a writer upon the art of horror that “Horror is not a genre, like the mystery or science fiction or the western. It is not a kind of fiction, meant to be confined to the ghetto of a special self in libraries and book stores. Horror is an emotion. It can be found in all literature.” Meaning that horror is in everything, because it is something that is felt as an emotion by someone.

Today if the 1950s movies were to be seen, they’d be looked upon as “fake looking” or “just not scary, no stop”, so we’d just find them funny and laugh, thinking that was scary back then. But now, the movies we see are often bloody, more deathly, disturbing, suicidal, and demonistic. Which forms same emotion of freight, of what someone else had years ago.

But the main thing of question, is it seen as appropriate that horror has been so different from what it used to be? Well, for things to be grasped fully and understood with the imagination and the kinds of technology used, they have to be displayed want the horror authors want at all times. The reason of why is because they want you to know truth, of whatever it is of what they want you to feel, so that not only the author knows the overall message but the viewer does too.

For the viewer to know what truth it is to offer, then it’ll help expand the viewer’s knowledge of things in this world so that they can know what is being shared. So it actually is seen as what message the author has, as an artist to share it to the viewer. As a artist, viewers are going to always have a reaction to what they’re seeing because it is the art of horror.

By Google, horror is defined as “an attack of extreme nervousness or anxiety, or and intense feeling of fear, shock, or disgust.”  Horror today is the way is the what it is, simply because of how the author wants to communicate the displayed hidden truth, and it’s the viewer’s choice to see what they have to offer. So As the years grow, horror movies will always change and be different from the past, but in the end they’re all the same because they’re meant to scare you.