What makes an image offensive?

People across the country were debating the answer to this question after the recent H&M scandal. Earlier in January, an image went viral across social media platforms showcasing a young child of color modeling a green sweatshirt with the text “coolest monkey in the jungle” printed on the front.

SLA had no shortage of opinion on the topic.

“It’s very disappointing that such company in the United States in this time would promote or even create something of that nature,” said Senior Tamir Harper, who is African-American. “I expected more from H&M as I am a consumer of their products but I also see now that their standards are pretty low.”

“There’s two major things wrong this, the first one being that this exists. I don’t understand how anyone at H&M could think releasing this image would be okay. The second issue is that some individuals don’t see anything wrong with the imagery and the message it sends.”

Was the racial insult of the picture intentional or accidental?

“It’s a good example of something that just passes before your eyes on the internet, it’s so obvious to me that it’s offensive, I’m confused as to how H&M could make such a mistake,” she said.

“I don’t see why a company would do something to jeopardize their brand. In my sophomore class, we do a project on cognitive bias and a lot of this stuff is unconscious, does that make it better or worse? I don’t know.”

Harper disagreed that the image could have been an accident.

“I think that H&M understood that what they were releasing could be controversial but I think they took the risk because they understand their market will be okay. I think that if it wasn’t intentional, they need to hire some black people in their corporate offices to tell them when something is not okay and when it is okay because the staff they have right now is definitely not woke,” he said.

“Knowing how situations have been lately in the U.S. I feel like this wasn’t just intentional, but is attention seeking as well,” said African American Senior Nathan Little.

Would the text “Coolest Monkey in the Jungle” had been controversial if the model wasn’t brown, and dark-skinned at that?

“I don’t think the text is appropriate. I think that H&M wasn’t smart with it. When we look at this “Coolest Monkey in the Jungle” shirt we also look at the young white boy who wore a sweatshirt that had nothing to do with being a monkey in a jungle. I wonder if they did this intentionally or they weren’t woke or if they thought it was okay because in the Trump time we can put out things in this manner,” said Harper.

On January 9th, H&M released an apology where they stated that they understand why people were upset and that they’re deeply sorry.

Students reaction to the apology was mixed, and several didn’t even know it had happened.

“I wasn’t aware of any apology from H&M,” said Lahr.

“I don’t accept it. There wasn’t enough effort in the apology whatsoever,” Little said.

“I wasn’t shopping at H&M before seeing this, I now have a reason to keep it that way. I prefer thrifting anyways. This matters to be because I think we need to bring attention to the situation and wake people up from their ignorance,” said Lahr. 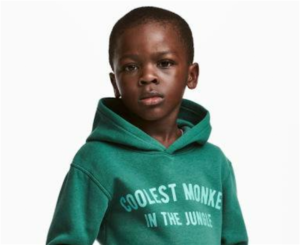 to shop at H&M before this incident but as of right now I’ve made a strong stance to not shop at H&M until I believe they’ve implemented measurements to make sure this never happens again,” said Harper.

“I have shopped at H&M prior and I regret it, I won’t be shopping there anymore. If I come across any local protests I will attend them because this is unacceptable,” said Little.