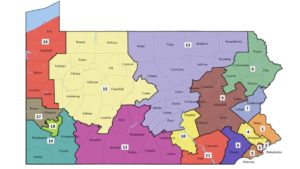 On February 19th, 2018 The Pennsylvania Supreme Court just released the new congressional maps after the Pennsylvania General Assembly, led by Republicans failed to create a map that was not Gerrymandered.

Since about January 1st, the leadership of the General Assembly began drawing the new Congressional Maps, but each map that they submitted was vetoed by Democratic Governor Tom Wolf.

The new map changes the game- most notably for the six candidates who had previously announced that they would run to replace Congressman Bob Brady, who announced in February that he would not be seeking re-election.

Since the maps were redrawn, the candidates that planned on running to replace Congressman Bob Brady have announced other plans. Dr. Nina Ahmad, announced that she will instead run for Pennsylvania Lt. Governor seat. Dr. Kevin Johnson and former Traffic Court Judge Willie Singletary, announced he will be running against Congressman Dwight Evans. Michele Lawrence announced that she will be challenging Congressman Brandon Boyle. Lindy Li, who ran for Congress a few times before but continues to not be successful will run for PA-5 as well as Former Deputy Mayor Rich Lazer. According to Philly.Com Bill Green is also running for PA-5.

Many Seniors and Juniors will have a say in who will represent Philadelphia in Congress. On March 14th students will have the opportunity to have assistance with registering to vote. So students take a second to view Committee of Seventy to know what Congressional District you live in.

With the change of the map will cause many things will change once it is implemented. Below you will find the breakdown of the new political map.

New #PA01 (old #PA08): Rep. Brian Fitzpatrick (R): This seat can possibly be flipped by the Democrats because it takes more of the Democratic portion of Montgomery County.

New #PA03 (old #PA02): Rep. Dwight Evans (D).: Congressman Evans will be safe in his seat but will face challengers.

New #PA05 (old #PA07): This seat is held by Rep. Meehan (R) who is retiring after a major conduct scandal involving one of his former female employees. This can become a Democratic seat.