The Philadelphia police are not exactly sure what caused this drop in homicide. Has Philadelphia become a nicer place to live, or have hospitals gotten better at saving the lives of victims of violent crimes, or has the police have gotten better at stopping these murders? Technology allows the police to analyze crime data better. This makes it easier to keep track of crime statistics. It is easier for them establish which neighborhoods remost likely to have lots have crime, and they can pay more attention to those neighborhoods. They are also keeping close eye on suspects, and ex criminals. The police may be getting more efficient at preventing murders. 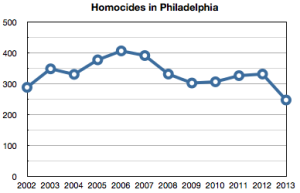