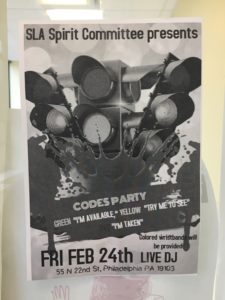 On Tuesday, January 24th, this sign appeared in the hallways at SLA — and it did not make the teachers happy.

The sign announced there was a dance to be held in the cafe, with different colored wristbands to show the other attendees whether or not or not the attendee was “available.”

Though the intentions of the party planners, seniors Ashlye Fitzmaurice and Niah Lombo, were not to be inappropriate, the party was not perceived in the same way by some of the faculty who saw a different message in the codes.

The Reasoning for the Party

Ashlye explained that the motivation for the party was an innocent one.

“Being that Valentine’s Day was coming up and at most high school dances people are afraid to approach their crush, we thought: ‘why not create a codes theme where people can tell others their relationship status by wristbands?’”

Ashlye and Niah did not think the party’s theme was inappropriate, otherwise they insisted they would not have gone through with promoting it. They received a lot of positive feedback from students so they figured that the party was going to be a hit. Many of the SLA students told them they would bring students from other schools.

The planners did not ask for approval from a teacher before they hung up the fliers, which is the main reason for the event’s downfall.

“The idea of a dance was run by me beforehand, but not specifically a ‘codes’ dance,” Health and Physical Education Teacher Pia Martin said. She made it clear that such a theme would not have been approved.

Many of the teachers thought that the idea of the codes party was promoting something that a school should not be be advertising.

“The issue was the way it looked. It seemed as if the codes party was based on the premise of hooking up, not hooking up, who is eligible to hook up, who wants to be left alone, those sort of things. The reality is that this is a school and we have to promote ourselves in the best possible light all the time and a lot of times people don’t take that into consideration because they are not thinking that way,” Ms. Martin added.

Though Ms. Martin understands that the intention wasn’t to make a “hookup party,” she also notes that it can be misinterpreted by students when looking at the flyer.

“I understand that these kind of parties happen at colleges all the time, but they are not hosted in the school, they are somewhere else. So for us as a school to sanction something that can be misunderstood as a hookup party, whether or not it was intended to be promoted as a hookup party, it’s just not the face we want to put out to the public or the kind of party that we should be hosting.”

The party was rescheduled without the wristbands once the faculty became aware of the codes theme.

“Many teachers laughed at the fact that we came up with this idea…They simply explained to us what they thought it meant in an adult’s perspective. After hearing their thoughts, it made sense why they aren’t allowing it,” Ashlye noted.

The signs were taken down on January 24th — but that wasn’t the end of the issues around the party.

The week of February 13th, a video surfaced on social media featuring several SLA students dancing in a provocative matter, including shots that were taken at school.

Thanks to the video, the school decided to postpone the dance in an attempt to separate it from the reputation of being a codes party and anything that was implied in the video. The party will now be held on March 10th.

School staff is not pleased with the developments, but they recognize that there is a limit to how much they can manage an event and its advertising. Ms. Martin has a feeling this is not a first time thing.

“Now I’m getting an inkling that there have probably been parties here that have been advertised differently than we thought they were being advertised, although I have no evidence to say that. The reality is, once we ‘okay’ something, the way it is promoted on social media we don’t necessarily have control over.”