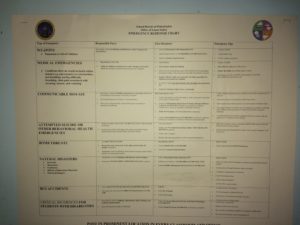 School shootings have been on the rise in the 21st century. A threat that was rarely considered by past generations now has become all too real of a menace. School shootings occur at a much higher rate in the United States compared to the rest of the world.

So, could it happen at SLA?

In our school, four sophomores and they all said that it had passed their mind that they could possibly become victims of a school shooting one day.

Unfortunately, It is no longer considered strange to fear a school shooting, which leads to the question: what does SLA do to protect their students from such a tragedy?

According to the Federal Bureau of Investigation (FBI), 97% of the time the shooter is male and 40% of the time they commit suicide before the police have a chance to arrest them. These statistics may point to the idea that our society’s expectations of males allow them to keep their anger inside until finally, they release it, which often ends up being A violent form as our society teaches men and boys to release emotions this way.

The FBI also has found that “Active-shooter incidents often occur in small and medium-sized communities.” These are places where police forces tend to be at a minimum and are restricted by small budgets. They also found that the average shooting lasts 12 minutes and tends to be over by the time law enforcement arrives, or they end almost immediately after first responders are heard.

Statistically speaking, SLA is less likely to be a school shooting target because it is located in a large community. However, there is still a School District protocol for practicing and preparing for such an event.

The most basic prevention for school shootings are lockdowns. Lockdowns occur without any necessary evidence of a shooting but just the sheer possibility of a weapon in a school causes a lockdown. These happen with some regularity in Philadelphia. For example, On November 20, 2017, Mastbaum High School in North Philadelphia, was placed on lockdown after reports of a gun.

Though they may seem extreme, lockdowns are proven to help prevent casualties in the case of an active shooter. For example, on November 13, 2017, Kevin Neal went on a shooting rampage at an elementary school in Northern California. As soon as the school officials realized they were gunshots and not firecrackers a lockdown was initiated. Students were immediately rushed into the school building to take cover in the classrooms. The quick reaction by the school officials is credited with saving the lives of countless students and adults that day.

School Police Officer Cynthia Byrd says that first a notification of a lockdown would be spread to the school over the intercom system and 911 would be called. In the lockdown, everyone is supposed to go into a classroom or office, lock the doors, silence their phones and stay hidden.

Officer Byrd said that in a real-life situation her job during a lockdown, specifically for a school shooter, is “To call 911, then call school district police dispatch.”

Engineering teacher and Fire Marshall, John Kamal, confirmed that this past school year, 2016-2017, there was no lockdown drills, which is in violation of School District Protocol. He also stated that every month we have a fire drill at the SLA Center City campus.

Will there be one this school year?

Officer Byrd stated that there is one coming up.

Do students literally know the drill?

This is specifically important at SLA because of various students, when asked how they believe they would react in a school shooting, responded that they would just run and ignore any instructions from the school. Maya Kohl, a 10th grader, said: “I would be like,‘all mans [sic] for themselves’ and be gone.”

When asked what could be done to make her feel safer she said “Having a self-defense class or some sort of preparation.”

This attitude is specifically what lockdowns seek to address — to create order and increase safety during a time that can be chaotic.

Autumn Lor, a Junior, participated in an actual lockdown when she was 12 because a man entered her school grounds with a gun and was threatening people. While no one was killed, one person was assaulted, Lor says it was very scary as it put her and other students in a vulnerable position as they could not contact anyone and felt alone.

Lor stated how half of the kids were “Scared to death. Hugging each other and crying.” Meanwhile she says the rest thought it was fake and took it as a joke until they heard the police.

The level of understanding of lockdown policies from students at SLA is mixed, with some having no understanding what so ever to other knowing all the details. It was noticed that many students who said they would ignore all calls by teachers and try to get out of the school did have a basic understanding of how a lockdown should proceed.

This all could lead to the ignoring of an actual lockdown and an ignorance of how to act leading to possible chaos.