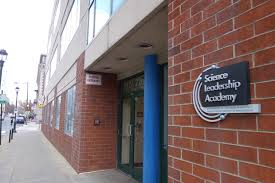 “I don’t like the idea of us moving at all. Our current locations helps SLA thrive and if we leave the chances of us getting another location anywhere near as convenient as 22nd and Arch are next to nothing. Overall I think there is no winning in this scenario.” says junior Rafi Hares.

For anybody unfamiliar with the story of SLA and the potential move, there are a few essential facts. For one, the School District of Philadelphia does not own SLA’s current home at 55 N. 22nd Street. They lease it for about $1.4 million a year. Second, SLA’s location is in a prime real estate area in Center City. SLA is also located at it’s current home because of it’s partnership with The Franklin Institute (TFI) and it being in walking distance for students to get there for programming.

On September 17, of this current school year, a “Future of SLA Meeting” was held at SLA’s current home. School District officials announced their scenarios for the future of the school and the SLA community had a chance to have their voices heard, as well.

“For me it was about listening to parents talk to the district, and get their voices heard.” says Chris Lehmann principal of SLA.

Two serious options that were presented at the meeting were Peirce Elementary, which is located on the 2300 block of W. Cambria St and the central office of the School District of Philadelphia, which is located at 440 N Broad street.

A significant strike against the Pierce site is its lack of access to public transportation. The site is not close to the Broad Street, Market Frankford, or West Philadelphia Trolley Lines. Many students who use services could see their commutes double or triple in time. By contrast, Lehmann notes that 440 is “as easy to get to as our current location.”

“The SLA community would consider 440 as an option, but only if they offer the school better space than they did at the September meeting.” says Lehmann. Lehmann also stated “They were giving us bad space, on the first floor with no natural light.”

The School District of Philadelphia would probably spend twelve to fifteen million dollars to retrofit the central office to accommodate SLA as a school site. As the district does not own SLA’s current site, they will not make capital improvements to that building.

SLA expects to know “soon” if the school is moving, because the move would have to happen in time for the Fall of 2016.