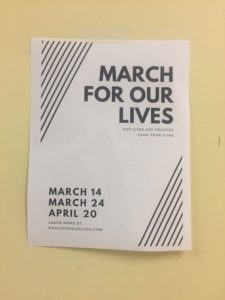 In the wake of the Stoneman Douglas High School shooting on February 14, several events have been planned to advocate for increased gun control in the country. The following three have gotten national attention.

The National School Walkout is organized by the same group that organized the Women’s March. It falls on the one month anniversary of the Stoneman Douglas shooting. It consists of a 17-minute walk out at 10:00 am, one minute dedicated to each of the people killed in Stoneman Douglas. The website states the walkout’s purpose is “to demand Congress pass legislation to keep us safe from gun violence at our schools, on our streets and in our homes and places of worship,” and that “students and staff have the right to teach and learn in an environment free from the worry of being gunned down in their classrooms or on their way home from school”.

March for Our Lives | Saturday, March 24

The March for our Lives is comprised of a primary march in Washington DC, as well as sister marches in other cities throughout the country (including Philadelphia). The students leading the march are demanding that a “comprehensive and effective bill be immediately brought before Congress to address these gun issues”. The organization has also started a petition, “An Act to Protect & Save Your Children”.

The National High School Walkout is on the 19th anniversary of the Columbine shooting. It is also at 10:00 am. A statement on Twitter from the organizers encourages students to “Sit outside your schools and peacefully protest. Make some noise. Voice your thoughts. ‘We are students, we are victims, we are change’”.

Many SLA students are planning to participate in the walkouts and marches, and since the National School Walkout is soonest, it’s on people’s minds the most. Senior Tamir Harper has been active in planning for the walkout. According to Harper, the plan for the 14th is for SLA students, possibly accompanied by students from Friend’s Select, Freire Charter, and Masterman, to occupy the sidewalks from 22nd and Market to 20th and Market Streets, where Senator Bob Casey’s office is located. Students should wear orange and bring signs if they can.

Several speakers were invited to the event, including Senator Vincent Hughes, Councilman Kenyatta Johnson, and Councilwoman Helen Gym. Outside of school, there will be a table where students who are 18 or will be before the next election (May 15) will be able to register to vote, as well as a letter writing table where students will be able to write letters to congresspeople, senators, and state leadership. Harper assures that these letters will go to the governor and the speaker of the house.

The reason Harper and other SLA students are invested in this movement is echoed in the sentiment nationwide. “We are walking out for common sense ideas. We don’t want people to be able to own assault rifles. We want bump stocks banned. We don’t want any more people, specifically young people in schools being shot and killed for no apparent reason,” Harper explained. “This conversation must continue to grow until we see our lawmakers do their jobs until we start feeling safe in our schools.”

Although we’ve heard horror stories like the threats of suspensions for walking out in a Houston-area school district, the Philadelphia school district has not said anything discouraging students from walking out, according to Co-Principal Gerwer. Superintendent Hite was even quoted in the Inquirer saying he’d “probably participate”. As for SLA’s administration’s stance, Mr. Gerwer said, “I think it’s always really awesome when students take a stand and let their voices be heard, and as school administrators, we definitely want to support that and encourage kids to be a voice for change… whoever has to be the voice to make the change [that senators and people in Congress aren’t making], I say yes.”