On Thursday, October 22, 2015, a panel of Tibetan monks came to speak to select advisories in the café. Dressed in traditional robes, the monks spoke for a little over an hour about their religion, lives dedicated to their faith, and also touched on some issues that their small region faced.

The six monks began their session with a five-minute video about Tibetan turmoil and the current state of the country. Afterward, they chanted a small prayer, their voices rhythmically filling the entire cafeteria with their sacred words. Over the silent breaths of the audience, one of the monks stood up and began to speak, first about his home country, then about being a Tibetan monk and the dedication it takes to spend his days in the temples. “There are some rules in the monastery and in our entire lives,” he says. “The culture of humanity: loving, kindness, good heart and an ethical life.”

He spoke of how to lead a kind and hate-free lifestyle, giving us lessons about how to deal with those who are against us and also how to find peace within ourselves, whether Buddhist or otherwise.

“We don’t consider ourselves Buddhists,” he explained. “We consider ourselves life-transformers.” Despite the SLA community being made up of a large variety of religions and faiths, the Monk’s speech was one that contained such wisdom necessary for peace, universally. Later, he answered some of the students’ questions, ranging from how long he’s been in the temples, to the meaning of some symbolic words and phrases.

The visit had been arranged by Wendy and Will Richardson, friends of the school, and the day’s events were coordinated by Digital Video Teacher Doug Herman. At the very end of the presentation, the monks thanked Mr. Herman for his dedication to the research and interest he took in Tibet. This was a tremendous honor, seeing that he has been devoted to the research of the monk community for many years, and to be displayed as such in front of the whole school was enough to send the entire audience into loud cheers. 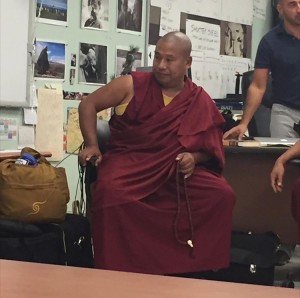 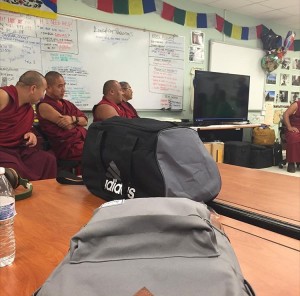