Dolphins, tomatoes, shrimp, what else could be needed in a practice standardized test? Many students end up making memes out of the content in the PSATs. These memes end up being very humorous –

– but only to the test takers who took the same test that day. They are the only ones that reference portions of the test that the majority have the same opinion on.  However, they are discussed vaguely enough their scores cannot be canceled.

When you take the PSAT, it is required to sign the test acknowledging that you will not share its information online. However, that’s exactly what people decide to do anyway — vaguely or not.

I personally get paranoid about posting online, so instead, I watch the memes from afar and laugh about it with my friends in real life. Since I saw that the official College Board Twitter account was acknowledging students posting online, I made sure to back away and directly message instead of publicly commenting.

Being a senior, I missed out on the PSAT jokes this year, due to having to take the real SAT. This makes now makes me feel old like a middle-aged woman who doesn’t understand the new and hip memes that the kids are into. I accessed the PSAT hashtag the day everyone took them but because I hadn’t taken the same test the younger classmen took this year, I failed to understand the content the memes.

I was observing what was being said about this year’s test, what kind of reading could have been included to have a large number of students answer questions about superweeds and Chinese soldiers? It just doesn’t make sense that random topics of two completely different things are put in for students to read about.

When it came time for testing, being aware of the memes made me look forward to testing in high school, making the idea more bearable. I can remember sitting in class almost completing the last section, itching to move around 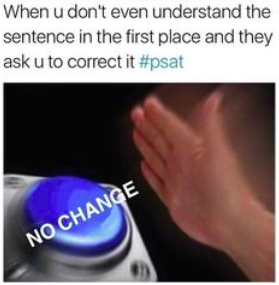 and talk to someone about the ridiculous mention of a “shrimp husband” in one of the English segments.

I didn’t notice anything specific when it came to the math section, probably because everyone was actually focused on just getting through it without any complications. I know I blocked the math section out of my brain, I probably didn’t do as well as I wanted.

Regardless, these memes exist for a reason. Emotionally, I probably wouldn’t have been able to make it if I didn’t have a dumb sense of humor with my friends. It is inappropriate to discuss the test questions, but I don’t think it’s doing any harm. It is a stressful time for students to have to sit still for five hours and put their brain to work, so the least we can do is look forward to some laughs after it’s done.