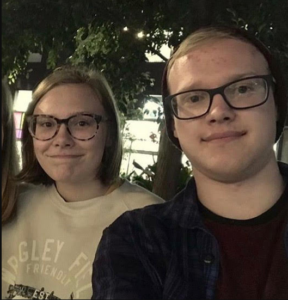 September, freshman year. The first day of African American History class I wasn’t expecting much. As I walked into Ms. Jonas’ classroom, I saw something truly horrifying. My brother was on the window sill, staring right into my eyes.

Okay, okay. So technically, it was a picture of my brother, left over from a class project completed a few years ago. It was still pretty scary. I sighed out loud and slumped in my chair. For four days a week for the rest of the school year, my ¨brother¨ would be watching my every move.

My brother Eamon Kelly graduated from SLA Center City in 2016, just one year before I started in 2017. Thanks in large part to his influence on me, I have known that I wanted to go to SLA since I was in the 5th grade. The idea of project-based learning seemed perfect for me. I dreamt of going to a school as cool as SLA. Only a few years later, I was accepted. I was esatic and I couldn’t wait to go.

There was just one nagging question that appeared in the back of my mind: Did I only get in because of my brother?

I pushed it away. There was no way. I was smart, I had a great interview, and I’m a great kid. It was all me. But now matter how often I reminded myself of this, it always stayed in the back of my mind.

I remember telling my two english SATs who my brother was, not realizing they knew who he was. How many people would remember a random senior in their freshman year? Apparently, they did .

“Oh my god! The kid with the hat! I love him!” I instantly regretted telling them. Now, for the rest of the year, I would be the “Kid with the Hat’s” little sister.

“Does Eamon do that?” He asked, as he peered over my shoulder.

“You never even had him,” I thought to myself. I quickly replied with a no and went back to my notes. I thought about this interaction for the rest of the day.

Realistically, this shouldn’t make me as angry as it should. It’s not like my brother is a horrible person. I would never say it to his face, but I actually really look up to him. People comparing me to him should be a compliment, not an insult. So, why does this make me so frustrated?

Well, for one thing, I’m my own person. I’ve spent so much of my life dodging questions like “Are you going to be a filmmaker like your brother? Or a musician like your parents?” For some reason, it’s hard to explain to people that just because your family does something, doesn’t mean you have to do it, too.

I’ve tried so hard to make a name for myself in my family. I wanted to be Mo, the one who’s really funny — but nope. That’s my brother’s thing. Mo, the actor. Nope, my brother was doing that long before me. Mo, the artist. But, did you see that new thing Eamon just drew? Frankly, I’m just tired of it. No matter what I do, I’m overshadowed by my brother.

Maybe it sounds like i’m overreacting. I probably am. But, when you’ve spent 15 years of your life trying to pull yourself out of the shadow of someone, you can get pretty angry about it.

I can’t say it’s all bad, though. The first day I met my advisor, the wonderful Ms. Giknis, she told me that she was never going to think of me as “Eamon’s little sister” and that I was my own person. I can’t even begin to explain how happy this made me. And if I’m being honest, Eamon isn’t the worst person in the world to be compared to. He’s well liked, smart, and really creative. I would rather be compared to him than someone who was a terror in my teacher’s lives.

Life is hard as the youngest sibling of three.  But, overall, I got pretty lucky with my family. Maybe it makes me frustrated. But, truthfully, I wouldn’t change it for the world.