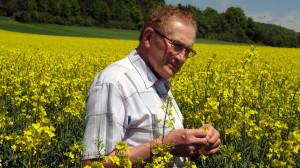 How is it that a small chemical company selling saccharine turned into the largest agribusiness in the world? It is interesting that Monsanto’s first big product was pirated from a German company who failed its attempts to protect its intellectual property. And now Monsanto is the only major company that makes a habit of suing its own client base for intellectual property infringement.

In the 1980’s the US Supreme Court ruled that a corporation could patent the DNA of a complex life form. Before that point Monsanto was not able to patent crops, which is now their primary source of profit. In 1996 Monsanto started selling Round-up ready soybeans and by 2008 over 90% of soybeans in America contained the patented gene.  At this point Monsanto owns intellectual property in most of the prepared food in America.

Monsanto does not allow its contracted farmers to “save seeds”, which is basically when a farmer collects the seeds from a crop and plants the collected seeds the next season. Since Monsanto owns intellectual property of the gene they always win in court. They send investigators to check the farms to make sure that they are not saving seeds. In 2009 they had 75 employees whose sole purpose was to investigate the farms. The farmers described them as looking like intimidating ex-military men.

Prohibition of seed saving is particularly hazardous to small farmers because small farmers who try to save money by saving seeds are prosecuted and can’t afford the lawyers, so the farmers have no choice but to settle and pay the exorbitant fines of more than $80,000. Monsanto, in its own defense, publicly states on its website that over a period of 13 years they have only sued 143 farmers. The company assures us that almost all cases were settled without going to court. In other words, farmers were forced to pay upwards of $80,000 plus any legal fees incurred along the way, sometimes as high as $400,000.00. At these prices it’s no wonder farmers settle before going to court. They can’t afford not to.

The contracted farmer who saves seeds to replant is not the only one that Monsanto sues. Monsanto sues seed cleaners because their existence encourages farmers to save seeds. And chemical-free farmers are also in peril. Percy Schmeiser, a Canadian canola grower was forced to stop growing canola when pollen drift from his neighbor’s field contaminated his crop. The only way a farmer can know if he has Monsanto’s herbicide tolerant plants is to spray it with the poison. Schmeiser had never used chemicals on his food crop. He only used Monsanto’s herbicide around the power lines. This is when he saw that the canola was not dying as it should have been.

When Monsanto learned of it they took him to court. He lost and appealed twice before finally winning. Even though he had spent a lifetime cultivating different strains of canola to withstand diverse conditions and meticulously saving and planting his own seeds, he could no longer verify what exactly was growing in his fields. So he changed crops. Years later, the Monsanto plants kept popping up in his fields. When called, Monsanto refused to come and get their plants. They also threatened him if he dared to touch their “property,” which was in fact trespassing on his own property.

When a corporation can own the DNA of a living organism and can’t control its spread it results in loss of diversity. Diversity of the seed supply is what farmers have excelled in from the earliest times. It is plant diversity that enables a crop to withstand the varying conditions of weather, geography and insect life cycles. Farmers must be free to do what they have done for ages thus assuring crop abundance for the future.