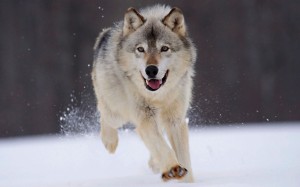 However, recently there has been controversy over the decision as to whether the grey wolf should still be considered an endangered species or whether it has rebounded sufficiently enough to survive without protection from the ESA. Earlier this year the grey wolves were delisted from the Endangered Species Act. However, there are many environmental groups with complaints

Before the Europeans arrived and started hunting and killing grey wolves there were approximately 2 million wolves in North America. Today, besides those in Alaska, there are only 6,100 wolves in North America. However, counting the number of wolves does not tell us how healthy a population actually is. Wolves have a complex family structure, but stressful conditions lead to a breakdown in wolf communities and although the numbers may look good on paper these animals can’t survive long-term under threat of   hunting.

Wolf population has been restored to 10 states, but environmentalists argue that their range should be increased but not necessarily to their previous status. Considering their unpopularity among ranchers it is not surprising that in Wyoming wolves are feared more than in any other state. The Wyoming law treats wolves like coyotes. In the “free fire zone” which comprises 85 percent of the land they can both be shot even if they weren’t bothering livestock.  Coyotes can recover from this kind of thinning, but not wolves.

Today’s overpopulation of deer and resultant tick-borne Lyme disease is a direct result of the decline of natural predators. The predators were killed because ranchers felt their livestock were threatened, as with cougars, or they were poached for their desirable pelts. For the wolves it was both of these reasons. Environmentalists offer statistics showing that since the reintroduction of the grey wolf to Yellowstone National Park less sheep were killed on ranches, not more as the ranchers had expected. This is attributed to the fact that wolves are the only effective form of coyote control.

All of this shows that the wolves being delisted would cause conflict.  Even though farmers find them a threat, we cannot ignore the simple fact that wolves’ safety is essential to the health of our environment. It is important that everyone is aware of how they benefit nature and society and what would happen if they were to disappear.