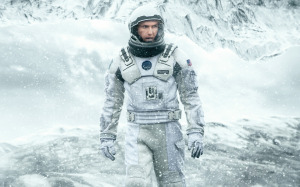 Essentially the film takes place in a world that can no longer support humans so Matthew McConaughey’s character, a former astronaut named Cooper, who, along with a team of scientists, head out into space, specifically though a mysterious wormhole in search for a planet that can sustain humanity.

To the film’s credit, it has MANY impressive visual feats that makes it a shoo- in for at least a nomination for best visual effects. For example, when Copper and his team are first traveling through space it has some beautiful shots of Earth from a distance, Saturn and especially when they travel through a wormhole. It also has a well-picked cast that carry off their characters fairly well, even if the characters themselves may not be fully developed or rounded. It’s able to pull off some emotional moments fairly well, even leaving me slightly teary-eyed.

However, it is overall a missed opportunity and failed to reach the heights and ideals it promised us as an audience. We come in thinking it’ll be about trying to secure humanity’s future beyond the planet we came from and ultimately leaving the world that we’ve had our collective history on. Instead we had Matthew Mcconaughey complain about not seeing his kids. The go-to-space-to-save-the-earth plot is a great concept to work with but got so tangled up in the individual character’s drama’s and problems it began to lose its overlaying sense of epicness. The world is dying, but the film only portrays one small town and how they are dealing with that, when the film could have shown how it affects the rest of the world-in big cities and internationally. And not to mention that with the entire world at stake, the majority of people working on this mission are white, which made the focus of the film seem narrow.

While I felt that Christopher Nolan’s film Inception was a masterpiece, Interstellar failed. In broad strokes they had similar storylines- massive ideas and concepts that revealed intimate moments of the human experience. In Inception’s case, it made more sense as it’s core was exploring the human mind, while Interstellar is suppose to be exploring the universe and the collective mass of humanity, so trying to whittle it down to the relationship between one man and his daughter didn’t feel right.

I would recommend the film if you’re interested in big space shots, beautiful cinematography and solid acting, but would not recommend it if you’re someone who needs a clear plot line to follow or doesn’t like not getting what they came for.