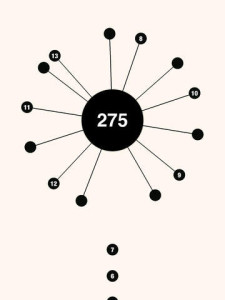 “aa” is simple yet complicated game. You start off with a big circle in the middle of the screen with the level number on it. Below that big circle is a single line of  tiny circles with numbers in them in order of a count down. When you touch or flick the screen, a dot shoots at the big circle and connects to it with a line. The big circle begins to spin like a wheel at a moderate speed, with the connected dot orbiting it like a moon on a string. You continue shooting the dots in order to connect them to the big one until you reach 0. When you get all the dots connecting to the circle, the screen turns green and you unlocked the next level. If the orbiting dots touch each other, though,  then it’s instant game over/ The screen turns red and you have to restart with all the dots. As you continue on the levels have different number of dots that you have to shoot in. Some levels have dots already connected. There are some levels where the speed switches making it more difficult.

What I mainly like about the game is that like I said, its simple but complicated. The game aa can become a rage game where it makes you frustrated but not enough that makes you give up, instead it motivates you more. This makes the game addicting.

The game is on android and iPhone. On the android you can change the color scheme unlike on the iphone. Generally however, the game isn’t flashy where it’s extra colorful and lights flicker, so it is an easy on the eyes kind of game.