What do you do with 70 Beyoncé tickets? 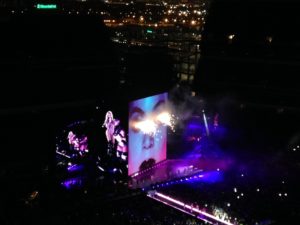 This is the question that SLA staff had to ask themselves when they got the news from the School District that these free tickets would be available to seniors.

The teachers were surprised and confused by the news and some felt that there were more effective ways Beyoncé could have supported the school district.

“Free tickets are nice but the school district could have used a financial donation from Beyoncé more,” said Ms. Pahomov.

After school on the 21st of September, the staff held a group conversation to decide on what would be the most effective method to distribute. It was clear to them that the fairest way to distribute the tickets would be to hold a lottery as any other method would involve the judgement of the teachers.

To enter seniors needed to give their name to their advisor and be up to date on paperwork. Approximately 70 seniors entered the lottery. During lunch on Monday, the names of the winning seniors were pulled out of a hat.

While many students were thrilled by the opportunity to see a Beyoncé concert many were more excited about the lucrative financial opportunities.

“I was initially very excited,” said Kia DaSilva. “I like Beyoncé and I wanted to go to the show. I then realized that I had Math class on the day of the show and couldn’t skip so I decided to sell them. Depending on the section I’ll sell my two tickets for between 75 and 150.”

Tickets for the concert were officially being sold from a range of $45 to $280. The tickets were given to winning students who had submitted their permission slip by advisors on Thursday afternoon after advisory.

While for the most part students enjoyed the concert, there were some common complaints.

“I have mixed feelings about it,” said Fatu Castillo. “I got there fairly early and it was cold rainy and all types of wet…for the first half of it Beyonce wasn’t there.”

These weren’t the only complaints. Most of the seats were at the very top of the stadium and not covered from the rain. Many students were angered when security confiscated their umbrellas.

“I was kicking and screaming, I was so angry,” said Kia who coincidentally ended up attending the concert rather than selling her tickets. “I thought they were going to take my big bag of cheetos that I bought specifically for the concert.”

When Beyoncé actually appeared on stage many students thought the concert was worth the rain.

“I felt a lot happier and a lot warmer when Beyonce walked on to the stage,” said Fatu. “[I]t was magical.”

“The box shot fire and fireworks,” said Kia. “She came out of it and there were acrobats. People were crying…She owned the rain…Her producers had all these waterworks going on…She was the rain goddess and everyone was in awe.”