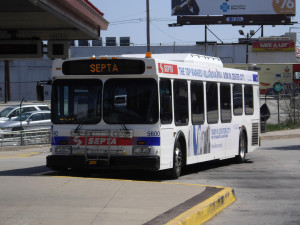 When you see somebody on SEPTA outside of school, what do you do?

If you’re similar to most of the students in SLA’s Journalism class, the answer is: don’t say hello and avoid eye contact.

Senior DeShawn McLeod and Sophomore Soledad Alfaro-Allah experienced this exact situation on the Saturday during EduCon.

On their commute home to Mount Airy, they noticed each other on the train.

“I had already seen that she was on the train,” DeShawn said, “but I was too tired to initiate contact.”

Soledad noticed DeShawn later, when she was getting off at her stop. “I was like: should I say hi? …I’m not going to say hi. I’m going to just let her roll.”

They admitted this lack of action to each other during class on the following Monday and had a good laugh about it.

The story led to a deeper question: why don’t we talk to each other going to and from school? And why do we feel bad about it when we don’t?

One thing influencing this situation is that SLA students and teachers are already quite social at school. They’re not necessarily avoiding each other because they don’t like each other.

For example, Soledad is in Poetry Club, and English Teacher Matthew Kay is the club mentor. Mr. Kay even worked for Soledad’s mother when he was in college. But that doesn’t lead to them talking while commuting.

On the regional rail, they see each other often, but rarely speak.

“I’ll see him, and we’re close, but I won’t say anything to him,” Soledad said. “It’s like an unspoken agreement: you’re chillin, I’m chillin, I’m just going to let you go.”

On the Broad Street Line and the Trolley, the situation is different — but it doesn’t lead to more talking.

“Everyone kind of just stands there,” Sophomore Isabella Mezzaroba said. “People even get on together, but they don’t talk.”

Even when conversations do happen on public transit, they’re over as soon as ride ends.

“Ms. Dunda gets on the trolley, and then makes conversation,” sophomore Melissa Alvarez said. “But as soon as she gets off, she’s in her own world.”

Students felt that this behavior wasn’t rude — in fact, it was a common courtesy to each other.

“You’re bringing people back into the environment that they just left, or are about to enter,” said Sophomore Jesse Shuter. “It’s inconsiderate because they’re trying to either recuperate or prepare for school.”

“I think we sometimes have trouble believing that people have lives outside of school,” said Sophomore Claudia Bonitatibus. She said she’s “surprised” when she does run into somebody.

“My school life and my social life are totally separate,” said Senior Isabela Supovitz-Aznar. “When I do run into somebody from school, it catches me off guard.”

Many teachers have similar feelings.

“When I see kids on the trolley, I feel like I don’t want disturb their existence,” said English Teacher Ms. Pahomov.

The pressure to say hello seems to be most prevalent with the freshmen — they say hi outside of school, and also in the halls.

DeShawn admitted that she was once one of these eager underclassmen. All the way back during Summer Institute, she approached Mr. Kay and tried to talk to him on the train, when she later realized that he was in what she characterized as his “chill zone.”

Eventually, she got the hang of the silent treatment outside of school.