On January 17 2014, two students were shot at Delaware Valley Charter High School. The bullet hit a boy and a girl in the schools gym, seriously injuring them. The students survived, but had to go to the hospital for their injuries.

At first the police were unsure who fired the gun. On that same friday they questioned some students who they later found out were innocent. The next day, Seventeen year old Raisheem Rochwell turned himself into the police, admitting that he had fired the un.

Rochwell was arrested for two accounts of assault, since the bullet had hit two students.

Like many Philadelphia high schools, Delaware Valley Charter has metal detectors that the students walk through when entering the building, for security. This left the police wondering how a gun was able to get into the school. The police later found out that Rochwell did not bing the gun to school. It was brought by eighteen year old Donte Walker Delaware Vally Charter Alumni.

Walker did not have to go through the metal detector because he was an alumni,and was therefore treated as a guest, not a student. Because of this he was able to bring a dangerous weapon into a school ,which injured to students.

After these events, Delaware Vally Charter increased school security. Alumni now have to go through metal detectors, just like students. Students were subject to search after the shooting, and there is more school security. Students are actually encouraged to arrive at school early so that they can get through security.

School security has been an issue in Philadelphia schools. all school district high schools have metal detectors except for SLA. SL is a pretty safe place, so these security measures have not been enforced.   But if security in schools isn’t in placed until something happens then it is already to late. Hopefully SLA will remain a safe place for learning, and will never need more school security. 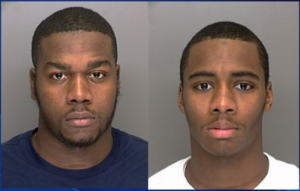