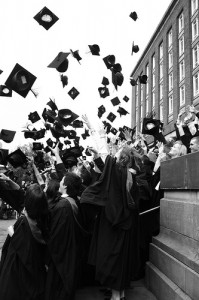 Think back to the days in elementary school when firefighters and policemen came to visit.

They would talk about their professions how some day you could also be doing the same thing as them.

Many members of the SLAMedia staff have aspired towards being doctors, nurses, astronauts, veterinarians, teachers, even waitresses.

An important part of high school is that when those four years have gone up, you come out with a sense of what you want to pursue later on in life. This is the case for many of high school graduates, but for others, it isn’t. During the college process, students base their choices on how they relate to their specific field. But what about the students who have undecided majors?

When they finally enter a college setting, they are set free into a world without any focus. While the college/university may offer programs or courses geared toward finding a major, if one doesn’t have any focus, then the programs are ineffective.

With the average student in Pennsylvania alone accumulating close to 30,000 dollars in debt at graduation, is it really worth to enter the collegiate world “undecided”?

Although it is not the end of the world if you take those four years to find your focus there are cheap and even free alternatives to this. All of which can potentially be done before the college process even begins.

It all starts with the student’s personal ambition and their willingness to take the initiative.

For example, let’s say a student is very interested in video production. Do some investigation to see if your school offers a class or program like SLA’s own Rough Cut Productions. If not, research into possible internships that may be focus on your specific field.

Worst come to worst, go out and try to network yourself amongst any local broadcasting studios. Then when all else fails, utilize the internet.

Websites like Youtube offer tons of video-tutorials dedicated towards video production; in addition to the millions of other videos hosted on the site. If that sounds too daunting, a simple Google search can open your eyes in more ways than one.

These pathways don’t have to apply to just future directors and producers; anyone could do the same thing whether they want to pursue math, physics, ceramics, etc.

Again, it all comes down to how greatly you want to pursue the things that interest you and that’s what really matters. Taking the things you love to do and putting them through higher levels of education.

For many people, the majors they pursue in college are geared towards the professions that make a lot of money. Careers like doctors and engineers are widely sought after because of their high potential for money.

What’s the point of spending five or more years in college, spending tens of thousands of dollars, on something that you don’t love?

Of course, one shouldn’t shy away from being a doctor or engineer. If that’s some you truly want to do, then pursue it.

Or even if you’re undecided, you shouldn’t feel ashamed about it. If you really want to strive towards a certain field, you go for it wholeheartedly.