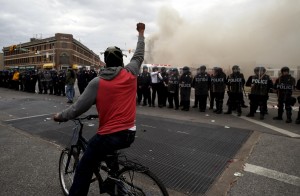 With 2,800+ innocent, unarmed people shot and killed by Police officers; most of which are African-American males, it’s impossible not to sympathize with this struggle,Through the lens of a mainstream, white-controlled media, it’s easy to villainize the protesters in Baltimore and other areas about this issue. as they will often label them as “rioters”, “thugs”, and so on. It only takes the the tiniest dosage of thought and research and we can see that this is not simply a “minority problem”. It is a human rights issue.  And It’s impossible to say that the police force in the United States should not change.

In a report from USA Today  last August, around 400 unarmed civilians were killed by the police per year in the past seven years, making the total number already up to 2,800 people-most of which were  African Americans. In November, a mere 3 months after the report,Tamir Rice, a 12 year old, who was shot for having a toy gun outside a Walmart, which is even more infuriating when you consider how many actual white serial killers like James Eagan Homes are able to get away with simply being arrested by the police, yet the Police will shoot defenseless black children. You’ll hear and read about any number of news reports of cops being overly aggressive to what the situation requires. This is even more troubling when you compare it to several other countries,who have reports of much less civilian casualties.

While not all cops are killers, the problem has grown to the point where nothing short of an extensive change in the police force is needed. In our discussion on the topic, we agreed that the depth of the problem also called for some radical, systemic changes in how the police train and work.To this extent here are suggestions from SLA students for what  could be some potential resolutions to this issue:

While the situation in Baltimore is not ideal way to resolve, its utterly understandable how it’s come that, and it’s hard to see that without some kind of dramatic reform, the situation will not improve.