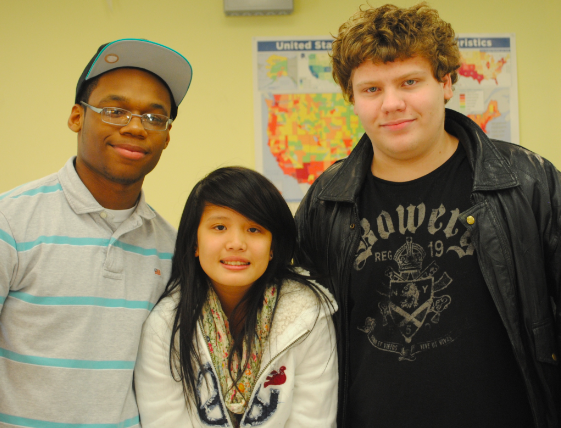 When coming to high school, it takes time to adjust. Most high schools reflect what the

community is, but with a school like Science Leadership Academy, being a diverse community of its own, has created a completely different way of adjusting.
Three students from Rosalind Echols’ freshman advisory felt that adapting to an environment such as SLA took a little time with the work, but found the people at SLA very outgoing and friendly.
Freshman My Troung had no trouble joining the SLA community, but her parents had a difficult understanding the use of laptops and benchmarks.
“My first stress was family because, as you know, sla is different from other schools especially 15 years ago, comparing it between both time periods”, stated Truong. “Help from the counselor and my advisor got through with school and working on laptops, including projects.”
She feels strong about how he’s adapting with school.
“I feel like i do adapt to school. I do have more work to do, at the same time i don’t learn taking tests, but I do research and learn with help from the teacher. I think that i adapted to the school in a really good way.”
Fellow freshman advisee Pierce Meier, agreed that the work was what took time getting used to.
“I was mostly used to writing things down and using text books, assignments being due after school, no nice kids, suspensions, and being on top of my work.”  Meier said.
Compared to his previous schooling experiences, “here, it’s more friendly, more kind, less trouble.”

For Meier, a lot of stress had come from a medical condition hitting during benchmark season.

“Stress came with early October right when benchmark season started. I had to catch up. I was 3 days or 4 days behind. I had no work done and not a lot of sleep. I had to make a commitment.” (He ended up with As and Bs for his first quarter.)

“I still need more time. Its gonna take a little time to adapt. Writing is what I’m used to. I need to get used to using a computer, make more friends.”

Another Echols advisee, Kenyatta Bundy, felt like he adapted well with SLA and the people very well.

“Not much drama, just stress,” she said. “I have a lot of friends, participate in a lot of stuff, i do well in classes.. I think I do that well.”