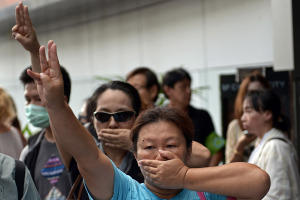 After the release of Mockingjay Part 1, protesters in Thailand began flashing the popular “three finger salute” as a symbol of their own rebellion.

The Interview, starring James Franco and Seth Rogen and set to be released this fall, has caused anger among the citizen’s of North Korea and Kim Jong Un, the nation’s leader. The anger has gone as far as death threats against these American actors.

It is no secret that films can be powerful influences in people’s lives. However, some people view this as an issue. If one is pro-democracy, the spark that these movies light is a great one full of change. But on the other hand, if one is against democracy, these films pose a threat. There can be many causes for unrest among nations through films such as comical assassinations of leaders, signs of rebellion or other threats against another country.

Based off the the award-winning Hunger Games book series, director Francis Lawrence took up the task of producing the third book in the series, called Mockingjay. Katniss Everdeen, a bold female protagonist, is the face for a large revolution throughout the country. In the books and movies, a particular three-fingered salute becomes a symbol for the rebellion, and has also become a symbol for a revolution in Thailand.

Since May, citizens in Thailand have been protesting the military’s coup of the nation through a series of speeches, riots and other protests. Protesters have been flashing the three-fingered salute as a representation of their own revolution which causes the government unrest. Local police and officials have been ordered to arrest anyone who flashes this symbol, and his since banned the screening of Mockingjay nationwide for its radical and revolutionary ideas, dangerous to any sort of unstable government.

More recently, Sony is planning to release a comedy on Christmas Day entitled The Interview, a film focused on two TV newscasters, played by Seth Rogen and James Franco, who have an interview with North Korea’s leader Kim Jong Un and are recruited by the CIA to assassinate him.

After hearing plans about this new film, Kim Jong Un called it an “act of war” and swore “merciless” retaliation on the United States if the film was released. Similarly, an official news spokesman from the Korean Central News Agency said, “The act of making and screening such a movie that portrays an attack on our top leadership… is a most wanton act of terror and act of war, and is absolutely intolerable.”

Thus far, those involved has not expressed concern towards these threats. In fact, co-lead actor Seth Rogen made a joke about it on Twitter saying, “Apparently Kim Jong Un plans on watching #TheInterview. I hope he likes it!!”