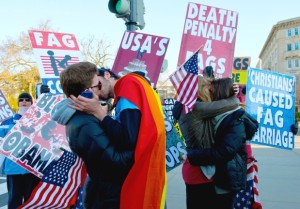 Soon the Supreme Court will make its historic ruling as to  whether or not gay marriage should be legal in all 50 states. A few weeks ago, in response to this, a group of anti gay marriage advocates, one of thousands, protested against this mostly citing religion and an erosion of family values.

Here’s the thing: I don’t care what your religion says: but you do not get to decide my rights based on it. And I am tired of people using it as an excuse.

First of all, this country is based upon religious freedom and secular government. I mean I could believe in the great wookie monster if I damn well please, but should I get to write laws based off what he says? No. Its because not everyone will believe as the lawmakers do, so they can’t write laws based off of it, ergo they should not push down gay rights because of it, especially as there’s even evidence to show that marriage came before Christianity.

I remember when current Republican presidential candidate Marco Rubio said: “Because today we’ve reached the point in our society where if you do not support same-sex marriage, you are labeled a homophobe and a hater.” Well what else do you call it Marc? You don’t think I’m entitled to the same rights as everyone else? you’re getting defensive about being called a “hater”, but you are one.

Some people might like to have civil unions instead, which I pretty consider the equivalent to the “colored” water fountains- a separate but “equal” policy. And another wanna- be President Rick Santorum has said that if the Supreme Court decides in favor federal marriage equality,  then he will actively fight it. And they aren’t the only ones- I think every GOP candidate for the presidency thus far, and any newcomers, will be against gay marriage, and probably gay rights overall. These people all have a chance to become leader of the free world and they don’t even respect the freedom of people.

These candidates are a part of the larger war against the LGBT community by usage of religion, and I am damn tired of it. Religion does not have precedence over the rights of human beings. If you took a child and you raised him in different households of different religions, he’ll likely practice what he’s taught, but if he is gay then he’ll never stop being gay. People are born gay, but they aren’t born with a religious identity. However using their religious identity people have killed others- sometimes even their own children-  and used the excuse of religion. Now some people might say that these people don’t represent the current group of Christians as a whole. However, that argument quickly becomes the “not all men” or “not all cops” defense, which just does not hold up. When a group of people have messed up a system and perverted it this much, the only way it will get better is with a massive system change. Therefore, a person’s identity that exists at  birth and cannot change needs to be protected over belief systems that CAN change. Human rights are important enough to do so.

I think the protection of discrimination due to religious beliefs needs to come to end. It’s been used to keep the status quo of racism, slavery, women as second- class citizens and so much more.When we allow a single religion to influence the law, then how are we different than many of the governments we are fighting in other parts of the world? All people, with all their unique and individual loves, emotions, and stories deserve the protection and rights of their government.