Have you ever stopped and wondered lately, “Man, I sure wish I could enjoy a game of Dungeon and Dragons right now.”

No? Well neither did I! In fact, I kept my thoughts as far away as humanly possible.

The closest I ever got to that game was back in my middle school days when I quested, with all my might, to defeat the Enderdragon in Minecraft. Good times, getting chased by Spiders and killed by Creepers.

I never killed the Enderdragon, surprise, but the concept remains the same. Dungeons and Dragons is just too nerdy for me to pursue, that stays in my middle school years. How could I ever look my mother in the eyes if I spent the night before in a basement, with plenty of snacks and lots of friends, questing as a Rogue to save the kingdom?

Thinking about it now, quite easily.

But now is a chance at redemption, now I found a way to immerse myself in Dungeons and Dragons without feeling nonexistent shame. 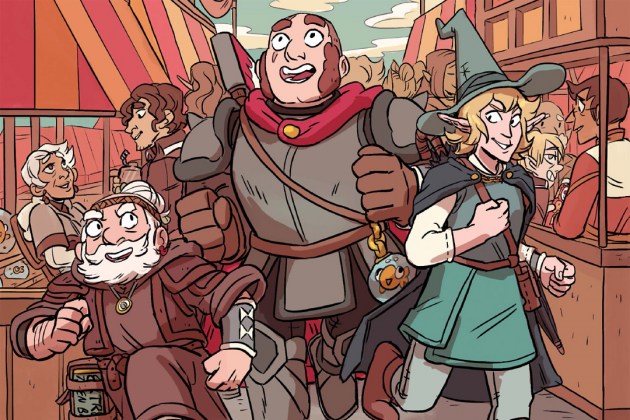 I’m going to be honest here and admit that it took me awhile to get into The Adventure Zone. I had seen it all over Tumblr, watched as every other Thursday it would flood the tags as a new episode wreaked havoc. I stupidly  looked as spoiler after spoiler came my way.

A word of advice, if you ever think “This spoiler won’t ruin anything for me, I don’t watch the show.” Slap yourself in the face, those are evil thoughts that will haunt you for life.

But back to The Adventure Zone, because it definitely is worth reviewing.

It’s produced by the McElroy Brothers, Griffin, Travis, and Justin, and their father, Clinton. Griffin plays as God, or the Dungeon Master, and the other three have to figure out how to get over the plot devices he throws their way.

I expected it to be predictable the first episode, it was only supposed to be filler episode in between their normal podcast.

They journey to a distant land, confront an evil tyrant, maybe kill a dragon, and save a princess.

Instead I got to bruise my ribs laughing from listening to Travis argue on whether or not he could name his character Magnus Burnsides, Justin stealing gold and shoes off of anyone and everyone, and Clinton casting Zone of Truth in the most inappropriate situations.

All the while, Griffin had to voice about a dozen different characters and constantly forgot which was which, leading to hilarious situations.

It isn’t just a laugh-fest, by the way, there’s an actual plot happening that is really starting to heat up. So it’s good for laughs and gasps, like when Justin casts a spell that topples the entire sequence that Griffin had laid out.

If you do decide to listen to The Adventure Zone, it won’t be what you expect, that’s for sure.