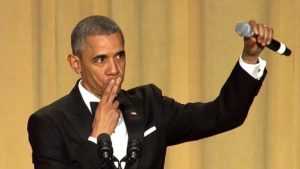 On Tuesday, January 10th, President Barack Obama delivered his final speech as President of the United United States from an auditorium in his hometown of Chicago. In just eight days our President Obama, First Lady Obama, and daughters Sasha and Malia will be leaving the White House as our first family to become “normal citizens” again.

He  spoke on many topics,  from our economy to foreign relations, but humbly did not speak about how him and First Lady Obama empowered and inspired so many young people to get involved with politics. Instead, he just encouraged citizens to “[You are willing to carry this hard work of democracy forward. You’ll soon outnumber all of us, and I believe as a result the future is in good hands.” Just like his first campaign for President in 2008, he told young people that yes, they can.

As they say goodbye to the president that has filled most of their lives, student at Science Leadership Academy had many sentiments to share with the world.

Junior Kaamil Jones made a facebook post about how inspiring the First Family was. “you have inspired me and so many others. I’m so proud to be apart of a generation that’s so inclusive and you have done nothing but push us forward. Since 3rd grade you’ve showed me class, dignity and true leadership. Thank you for showing me that I could literally be anything I want to be. Yes We Can! Yes We Did!”

Sophomore Kenzie Hopkins gave us in the inside of how she felt when President Obama was elected.

¨ I felt good because he got reelected and he was the first Black President to serve and be reelected. He showed no matter who you are or where you came from that you can do anything.”

Teacher Larissa Pahomov weighed in about President Obama effect on our students. When Pahomov was asked about the uproar in politics and social change from SLA students she said ¨It was inspiring to some students but did not cause an uptake in direct political engagement I think that ironically it was the election of Trump that mobilized students to do something about their political situation because they no longer felt safe and secure.”

She also described an unusual game that  SLA students played when the Obamas first moved into the white house.

President Obama said he will continues to serve us and represent us as an advocate and a believer. “ I won’t stop. In fact, I will be right there with you, as a citizen, for all my remaining days.”