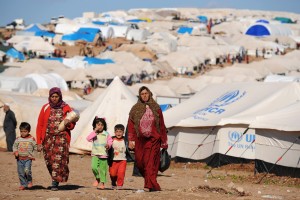 “Give me your tired, your poor, your huddled masses yearning to be free.” This is the quote inscribed on the Statue of Liberty. This, along with Lady Liberty’s torch stretched to the sky, has welcomed immigrants and refugees for over a century. This quote is the embodiment of what America originally was: a place where everyone is free to express themselves, free to be successful, free to be accepted on a level deeper than face value. Unfortunately, we have continuously failed at protecting that freedom for immigrant groups. First with African Americans and Catholics, then the Irish, Jews, Italians, then the Chinese and Japanese. Now, the issue is Syrians and other people from the Middle East fleeing their war torn homes.

In the wake of their civil war, millions of people have fled Syria, looking for a safe place to settle and raise families. Most of them have gone to Europe. But even the most welcoming of European countries, like Germany, have their limit. It would seem almost instinctual for the people of the United States to welcome these refugees, since the majority of us are descendants of refugees and immigrants. But for the most part, we are not opening our borders and it is time to question why.

Since 9/11, America has become a paranoid country. We fear different people and cultures, especially if those people and cultures are Islamic. The majority of the country now associates Islam with evil, but they are not the same thing. To quote former President George W. Bush, “That’s not what Islam. Islam is peaceful.” His sentiment has not convinced the masses, and we have allowed this fear to rule us. We increased security exponentially. Since 9/11, we’ve spent over $655 billion on Homeland Security and close to 2 trillion dollars on war. We have also increased the standards and restrictions for people who want to obtain refugee status in the United States. To apply for refugee status in the United States, you must be located outside of the United States, is of special humanitarian concern to the United States, demonstrates that they were persecuted or fear persecution due to race, religion, nationality, political opinion, or membership in a particular social group, is not firmly resettled in another country, and is admissible to the United States.

This is just the beginning of the process. To get into the country, you must get a referral, extensive background checks, several health checks, and the real kicker is, you have to pay for a lot of it yourself. It cost $680 to apply for naturalization alone, not counting all of fees for heal checks and travel to the US. And most of the refugees don’t have access to much, if any, to their money. There is an incredible amount of paperwork that needs to be done to just get into the country. Then, and only then, you can apply for a green card and work permit. Finally, you get to start the process and paperwork over again, and that’s if you don’t have a family. If you do have a family, the amount of work and money increases with each family member. Unfortunately there is always the chance that one of your family members won’t be able to come over for one reason or another.

The question we need to address as a country is, how can we change this? We are supposed to be the country that welcomes everyone, yet it is almost impossible to gain entry into America. These refugees could do a lot for this country. The vast majority of them are bilingual and that is a skill we need with the growing amount of Arab-speaking Americans. They are also willing to do the jobs most Americans are too proud to take. More people means new jobs and new money. We are, in many ways, morally obligated to help these people because The United States played a part in creating the problem that forced them from their homes. The War on Terror and invasion of Iraq and Afghanistan created immense amounts of resentment for America in the Middle East. We played a part in created the extremists who destroyed their lives. The least we can do is welcome them into ours. We need to force a change in the system. We can’t keep denying innocent and persecuted people access to our country because they don’t have the time, money, or skills to fill out the proper paperwork. We thrust these people into a bureaucratic black hole while they are trying to keep their families safe. This system needs a change for the better, and soon.

Unsigned editorials reflect the opinion of the SLAMedia editorial board.