It’s around that time of year again, when the temperature gets icy cold and we grab warmth from the wool gloves and cups we grasp in our hands. The Philadelphia area has a great way of introducing everyone into the holiday spirit, first by the traditional and familiar tunes played on B101. 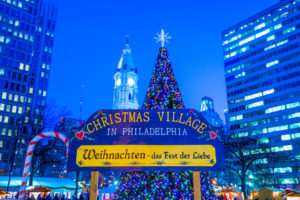 The city itself starts to begin the events that native Philadelphia citizens have become familiar with. Christmas Village here in the city officially begins on November 24th, ending on December 24th, just on JFK Plaza. This allows people to experience a bit of a German Christmas. The admission is free, but there are little shops, including authentic foods and arts and other traditional items from Europe and different places in the world that will allow you to spend money.

You are able to attend the Christmas Village 11am-7pm on Sundays and Thursdays, and 11am-8pm on Fridays and Saturdays. It is also open on Thanksgiving, Black Friday, and Christmas Eve.

Already open to the public is the Rothman Ice Skating Rink, located at Dilworth Park, which is on the side of City Hall. This rink is fairly new to Philadelphia, with its opening in November of 2014. It costs $3 for kids aged 10 and under, and is $5 for adults. To rent a pair of skates, it is $10. The days to skate are Monday-Thursday (noon to 9pm), Friday (noon-11pm), Saturday (11am-11pm) and Sunday (11am-8pm).

Another popular ice skating rink is the Blue Cross RiverRink Winterfest, opening the same day as the Christmas Village. The rink is located a bit farther away than the Rothman Rink, being on Columbus Boulevard near Penn’s Landing. It costs $3 per person, and $10 for skate rental. The Blue Cross Rink is open Monday-Thursday (1pm-10:30pm), Friday (1pm-12:30am), Saturday (11am-12:20am), and Sunday (11am-10:30pm). 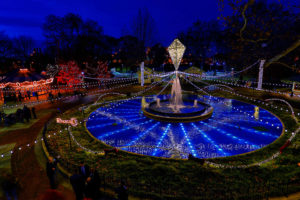 Another popular holiday season event is to visit light shows, Franklin Square putting on two stunning 30 minute shows. On Sunday-Thursdays, the shows will start around 4:30pm-8pm. On Friday-Saturdays, it continues to 9pm. Lots of other areas around the city put up beautiful decorations, like Rittenhouse Square, Penn’s Landing, Macy’s, and even the Comcast Center. Both Macy’s and the Comcast Center have daily shows, 10am to 8pm.