Sports Talk with the Straight Shuter 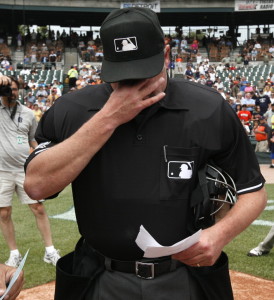 The World Series is one of the most important times in a sports fan’s life. When my favorite team is in the World Series I feel as though I would do anything for them to win. I can only imagine how the actual players must feel.

So far in the 2013 Major League Baseball (MLB) World Series (WS), there has been two major controversies that could influence the outcome of the MLB Championship. These controversies are typically solved by officials. However my question is, How much power should these officials have?

The first of these came after game one of the series, after an 8-1 win by the Boston Red Sox over the St. Louis Cardinals. One of the Cardinals’ minor league players claimed to have seen Jon Lester, the starting pitcher for the Red Sox, using Vaseline in his glove.

If proven to be true, which so far there is no evidence to back up this claim except for a picture in which Lester’s glove appears to be wet, this would be an outrage and would not only disgrace Boston sports, but the World Series itself.

In game three with the the series tied 1-1, the Red Sox and Cardinals were battling back and forth the entire game. The game was tied in the bottom of the ninth with Jon Jay, outfielder for the Cardinals, up to bat. Jay hit a grounder to Second Baseman Dustin Pedroia, who dove to grab the ball and got an out at home.

Next, Allen Craig, outfielder and/or first baseman for the Cardinals was going home from third after a bad play by Red Sox catcher Jarrod Saltalamacchia where he tried throwing to third to get Craig out as he ran to third. Third baseman Will Middlebrooks dove to catch the wild throw, and Craig began running home.

As Craig was running home, Middlebrooks lifted his legs up into the air, tripping Craig to the ground. Craig then stood up to continue running but at this point would be out. The umpire, Jim Joyce,  seeing this called that Middlebrooks obstructed Craig, illegally preventing him from advancing to the next base, and therefore awarded him the next base in this case, home plate. This call would win the game for the Cardinals. Currently the series standings are 2-2 entering game five.

Many people were very frustrated by this call, and for more reasons than one. Obviously many people would argue that the umpires got this call wrong and costed the Red Sox the game. As Red Sox manager John Farrell pointed out in a post game press conference, Middlebrooks was just playing the ball, there was no way for him to go for the ball without being on the ground, therefore Craig could have anticipated this and not have fallen over Middlebrooks.

Another point that I would like to bring up is, how much power should these officials have? Should they be able to influence the entire game of the most important series in baseball, on a call that could have gone either way? This is not the first time this idea has come into question.

On June 10th, 2010, Armando Galarraga pitcher for the Detroit Tigers, was pitching what is now known as the best game of his life. It is dream of every pitcher to pitch a perfect game. This is when the pitcher goes through an entire game without giving up a walk or a hit. It is widely considered the most difficult thing to do for any Major League pitcher, and it instantly sends the pitcher to the record books.

Galarraga had a perfect game going into the bottom of the ninth inning with two outs. All he needed was one more out to accomplish this task. The batter hits a weak grounder to the shortstop, who gets the ball to Galarraga at first in plenty of time, winning the game and putting Galarraga’s name in the history book right? Wrong.

The umpire missed the call, saying the runner was safe and ruining the game for Galarraga. Do you know who this umpire was? Oh, only Jim Joyce, the same man from the World Series controversy. Joyce later apologized for the call saying, “I had a great angle on it. I had great positioning on it. I just missed the damn call. I missed from here to the wall.”

The MLB is contemplating installing an instant replay system, similar to the National Football League (NFL), where officials can review the tape of controversial calls to make sure that they get the call correct. I like this idea and the they should implement it immediately. My only concern would be that the officials would become lazy and reliant on the tapes of the calls. That concern aside, today’s world is a technologically centered one, and it is time that the MLB accepts that and stops ruining their games with these officials who make human errors.

After Reggie Wayne went down for the season, one of these men needs to step up to fill the void left in that offense. My guess is that T.Y. Hilton will be the guy, but if the opposing defenses figure that out and cover him, Heyward-Bey will be open and score quite a few TDs.