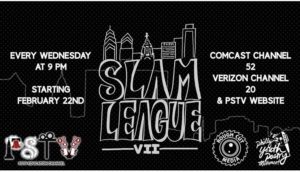 The first poetry slam of the year at Science Leadership Academy has been cancelled after being rescheduled twice. Originally slated for February 10th, It was rescheduled due to the snow day and then for the half days for report card conferences.

The final set date of the slam was supposed to be Thursday, February 23rd, but it just did not fall into place.

Sophomore Kimberly Gucciardi-Kriegh explained her feelings towards the cancellation.

“At first I was disappointed but I really do understand, we didn’t really have a lot of content, and it didn’t feel right to charge people three dollars for only 15-30 minutes of material. It wouldn’t have been enough. It was even more disappointing because of our work ethic, because the reason why we didn’t have the slam was mostly our fault since we didn’t have enough poems.”

Kimberly and students were looking forward to presenting, especially since SLA’s slam is a smaller crowd and is not the size of the PYPM slams that hold about 100 people. There were only about three group and three individual poems that were ready to go.

Previously, there had been at least 15 performances in our school-held poetry slam, so this development reflects a drop in activity on the part of the club.

Even though the event at school had been cancelled, that doesn’t mean you can’t go to see your friends perform and support SLA. Students contribute in the Philadelphia Youth Poetry Movement (PYPM). It is a non-profit and volunteer-run organization that allows different schools from areas all over Philly to compete in the poetry slams. The next citywide slam is on Friday, March 3rd at the Freedom Theater on Broad Street.

The slams are also now broadcasting on cable, on channel 52 if you have Comcast and channel 20 if you have Verizon. They are on a TV show where all of the slams will be. This is getting students of Philadelphia to be recognized and share their stories and pieces with those who watch.

Sophomore Nzinga Bey talked about how SLA should still have at least one more poetry slam before the season ends — and not just to share their art.

“We need the money. It would be interesting for everyone to show their talents and things like that.”

SLA has been fairly successful with gaining a champion title in the city, placing 2nd place last year, and holds the title of being a two-time division champion. The team hopes for a repeat this year.