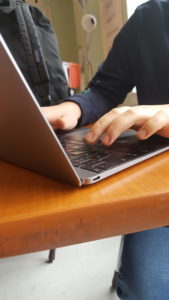 As you walk through the halls of Science Leadership Academy you may bump shoulders with a for profit Chief Executive Officer or a non profit Executive Director.

No, this article is not about the men and women that Jeremy gives tours to. These leaders are the students of SLA. Many students have started different initiatives — both nonprofit and companies that seeking to make a profit around an industry that is booming.

From Spectator to Journalist

The Co-Founder & Manager of the Empire, Benjamin Simon, gives us the inside of running his very popular blog.

“The Empire specializes in giving the public an in depth perspective into the City 6 of Philadelphia,” he explained. “We analyze the fabulous college basketball teams of Temple, Villanova, Penn, Saint Joseph’s, La Salle, and Drexel.”

According to the Empire website, the blog is staffed by many previous and current students of Science Leadership Academy. Simon states that “the Empire has 11 total staff members and a photographer, Luke Risher, who attends games.” The Empire also employs three editors, Benjamin Simon, Will, and Benjamin Boswell, a recent graduate of Florida Gulf Coast University.

When Simon found the inspiration for his website directly from the SLA Curriculum.   “I went to a journalism conference almost two years ago,” and “was inspired to begin my own blog with Co-Founder Will.”

They decided to focus on Philadelphia’s 6 college basketball teams so that the Empire would have a specialty focus.

From Techie to Specialist

When asked about his plans for the company he said he hopes to “satisfy all customers with a decent product, enhance his experience of ‘The iPhone’ and also help others get the understand of what phones are capable of.”

From Student to Activist

Junior Luke Risher, is the leader of SLA’s chapter of the Philadelphia Student Union with other students launch a student led Nonprofit to advocate for a quality and efficient urban education. UrbEd has a goal of changing the urban education system by 2026. The UrbEd website tells visitors their five key projects that they focus on, which vary from school donations to working to recruit more diverse teachers.

The Empire can be found at www.theempireofphilacollegebball.com.
To support Jahmar Askew cell phone repair business him via email at Jaskew@scienceleadership.org or on Instagram at Marfromphilly.