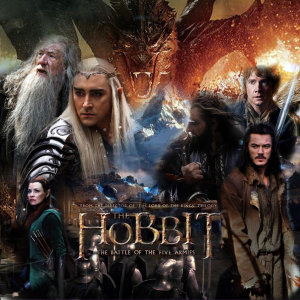 For the better part of the 21st century, the fantasy genre has been ruled by Tolkien’s works. Visionary director Peter Jackson has created the infamous and highly popular film adaptations. Now that Jackson has maxed the extent of the studio’s rights to JRR Tolkien’s work (for now, at least) this might be last of Middle Earth, at least for a while. So how did it do? lets take a ‘journey’ below.

First off the visuals, as always, were astonishing. From the fire-breathing of Smaug the Terrible, to the individualized armor worn by dwarves, elves, orcs and others,and the incredible battle sequences, the movie  was eye candy at its finest. The acting was well done, with strong performances being brought in from Martin Freeman, Ian Mckellen, Richard Armitage, Aiden Turner, Evangeline Lilly, Benedict Cumberbatch, Lee Pace, Christopher Lee, Cate Blanchett, Luke Evans, Ryan Gage and many more in this ensemble cast.

I also wanted to give a little applause for their inclusion of so many characters and, if mostly trying, giving them time on screen and even a few badass moments here and there. Particularly memorable is, while mostly through stunt doubles, is having 92- year old actor Christopher Lee in an action sequence fighting off evil spirits.

My main critique looks at the plot and thepacing. For a majority of the first hour or so, the characters are looking for an object that, while seemingly very important, does not get mentioned again throughout the film. Also, it was a little hard to tell who exactly were the titular ‘Five Armies” as I believe one of them was just a separate division of a larger one. They re-used the infamous eagles plot device (the giant eagles that seem to get anyone out of a mess) which made the ending a little cheaper. While I don’t know what exactly happened in the book, I felt some of the death scenes became overkill after a while.   In the new Hobbit movies they had introduced several new characters that we never learned of their final fates, which seemed odd considering how invested we were with some of their storylines. They also missed an opportunity that since they had mentioned Bilbo growing a tree to remind him of his journey they should have had a scene with him planting it, or since they had a flash-forward showing the three fully grown.

However, I think one of their biggest mistakes was showing when Saruman the white was going after the weak spirit of Sauron, who we know he serves in the LOTR trilogy, they should have had a mid credits, or final scene where Saurman met with Sauron’s spirit and I’ dunno drank coffee with him or something that signified he was turning dark and thus hinted to the other trilogy.

Overall, I was still entertained and found it a mostly fitting farewell to Middle Earth, that I hope we can still see more off on the big screen. I wouldn’t recommend it though to someone who isn’t familiar with the previous movies or even books, but anyone who is a fan can find a lot to enjoy.