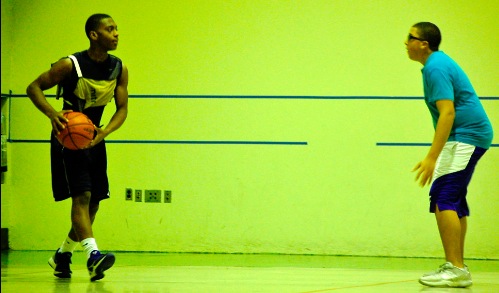 At SLA, school starts at 8:15am and allowing for the special “SLA time” that can even be pushed to 8:20.

However, for a different type of student, days start much earlier.

Meet the SLA basketball teams, two groups of hardworking athletes dedicated to waking up earlier and even forgoing sleep to pursue a dream or even just a hobby.

You may find these kids sleeping at their desks or laid out in the middle of the hall and just think they’re lazy, but to truly understand why they seem less engaged during the winter months, you’ll have to live a day in their lives.

Freshmen Allen Harmon and Kenayah Cerdan have just woken up. They need a couple extra hours in the morning to make sure they look their best not only for practice but also for the school day that lies ahead.

Showering is a must and for Allen, who lives an hour away from school, it just cant be done at night. But morning showers are a perfect way to wake yourself up that early.

Juniors Eryn James and Andrew Chalfen both take SEPTA lines to school. Lucky for them, this means they won’t have to lose any Z’s for practice. Senior Sam Sirochman catches a ride, happy that this morning was a good morning for his mother to drive him to practice.

Both girls and boys practice begin at 6:30am, but since the girl’s team is small there’s not enough people to scrimmage. Unfortunately, Coach Garvey knows there is enough people to run laps!

The team has mixed feelings about diving headfirst into practice this early. While Eryn excitedly begins to run, Kenayah lags behind, not nearly ready to begin. As the practice wears on she perks up and reminds herself, “Once it comes to that games, its all worth it.”

The boys’ team starts off a little slower with shooting as the rest of the team trickles in. As a senior, Sam should be used to this already, but even with his headstart in the car he still arrives at practice groggy.

Two other seniors, Tyler Hankinson and Nadif Bracey are already running around the court, forcing others to play defence on them. There’s no time to waste for a basketball senior, they have to be ready for college recruiters at every game!

Only one SLA basketball player remains sleeping. Sterling Perry is still in his bed as he takes a year off from playing ball.

“Last year the practices in the morning were messing up my grades and sleep schedule.” Sterling comments. “But I’m taking this year to get my grades back up.”

Although girls’ practice may begin earlier, Garvey lets them out early, knowing girls need a little extra time to prepare for school. Kenayah is worn out from the work out, but she continues to remind herself what it will lead to.

Kay uses his extra 15 minutes to do full court drills. He pushes his boys to the absolute best and holds them to the same standard he holds himself.

Finally awake, Andrew hurries to play defense on the tall upperclassmen in a drill.

When he finally dismisses them, Tyler and Nadif join Senior Rick Kinard in some teasing about their behavior in practice. They are examples of how once you let the routine become a part of you, you’ll recover from tiredness.

Halfway into the first class we can find Allen sleeping at his table, but he knew this would happen. “I’m always falling asleep during my first class.”

Lunch has finally come and for the athletes, this is the sleepiest part of the day.

“First period and a half you’re ballin’,” Andrew says. “At around the second or third you crash.”

“It’s a slow decline.” Sam adds. Luckily for these two they have plenty of time to regain their strength during their double lunch periods.

On a Tuesday, you can be sure to find Nadif wasting no time getting to lunch. “I’m hungry from cookin’ Rick.”

He’ll find his friends eventually, but for now its time for food.

At the second lunch period, we find Sam and Andrew in the same place, unfortunately, with no food.

“You can get hungry at all parts of the day.” Sam groans, wondering who will be nice enough to give him a snack.

“I could eat thanksgiving dinner and still be hungry.” Andrew comments. “But whenever I’m eating, I’m doing ok.”

Rick and Tyler compare schools trying to recruit them. Tyler lists his plethora of schools and scholarships: Alvernia, St. John Fisher, Lycoming, and Drexel. And Rick counters with “A nice school.”

By this time, all the athletes should be home. For Eryn, shes just now reaching home after some extra time socializing. For Allen, he’s just reaching home after a long commute. There’s no space for the teams to practice afterschool so for now they’ll have to make do with early days and late nights.

While the seniors spend nights adjusting college applications and possibly talking to some neglected friends, Allen is already in bed waiting for the morning. He admits, “Sometimes I really go to bed four hours early.”

Finally all the athletes are tucked away in bed. None of them are even tempted to stay away. Eryn even has a statement prepared. If any of her friends try to make her stay up she says, “No. I like my sleep.”

It takes real dedication to keep up a schedule like this for three months and even more dedication to keep it up for four years. This is why our athletes are able to rise above all the other teams, the kids who make it through these four years build up a special kind of endurance that no one can compete with. But still the question remains: Why?

Kenayah: “It’s all about the gameplay.”

Eryn: “It’s all about college.”

Andrew: “I don’t want to do bear crawls next practice.”

So perhaps the next time you see one of these athletes too tired to even walk to their next class you’ll remember how much harder they’re working to be barely there. Before you look down on them, ask yourself if you have the endurance to do what they will do or have done for the next four years.