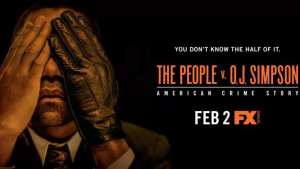 The glove, the Broncco, Nicole’s 911 calls and the Mark Fuhrman tapes, the curls. All this and more are brought back to our television screens with Ryan Murphy’s heavily anticipated debut season of “American Crime story,”another show that has a different story line with each season. This season focuses on infamous case “The People vs. O.J Simpson” and is almost certainly going to be this seasons hot award ticket.

Beginning on the night of the tragic murders of Nicole Brown Simpson and Ronald Goldman, the show chronicles  the resulting media fueled trial of the century that cast a dark spotlight on america’s issues with race, gender, class, celebrity culture and more.  To put it simply: Every episode I saw astonished me . The quality of the show was stellar,  episode after episode after episode.  I’ve seen some episodes multiple times now, and I can still watch them with almost the same feverish anticipation and interest as I did the first time.

Here are my thoughts on a few aspects of the show:

Now I can’t talk about this show without crediting  about this incredible cast. Oh my god this cast. With everyone in this show giving nothing short of excellent performances- some that have even been the best of their careers. From John Travolta — my favorite presence — David Schwimmer, Nathan Lane, Christian Clemenson, Bruce Greenwood, Kenneth Choi, giving their best work in years.  Joseph Siravo giving a brief, but powerful few scenes as the father of the one victims, Sterling Brown becoming something of a breakout star.

The ultimate cast credit has to go to Sarah Paulson and Courtney B Vance for stealing the show. Paulson’s Marcia Clark becomes the heart of the story as we see her crusade for justice for the victims and their families while battling the complexities of the case, a divorce settlement and the sexism harassment of the media. Courtney B Vance is breathtaking as the famous lawyer of Johnnie Cochran, who uses the case as platform to highlight racial injustices in America, particularly the LAPD- especially considering this case about two years after the Rodney King riots.

The case highlights the injustices that many african americans face , but also comes to references of gender, class, celebrity culture, the failings of the justice system and more. The series never explicitly suggests  that OJ Simpson is guilty or innocent, instead allows the audience to look at the facts and the emotions in the case and allows the audience to make its own mind on whether justice was served or not. The show managed to be both funny and heartbreaking,  and while it took place 20 years ago, it’s startlingly relevant to the present day  and deserves everyone’s time and attention.