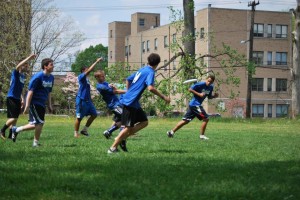 What started out as a club team dating back to the very early years of SLA is now a Masterman crushing, Radnor-beating team of ultimate frisbee players.

When the club started out, it was a few students that liked to play after school. The team has quickly developed to play in regional tournaments and contests.

Now in it’s fourth year with founding teacher and co-coach Ms. Echols and, new co-coach Principal Chris Lehmann, the team had a strong season–causing many upsets to other bigger and more established teams.

“When I first started working at SLA, frisbee was sorta like an activity that a bunch of kids would do after school–mostly student initiated. Occasionally an adult like Mr. Best or I would go out there and teach them some skills, but there wasn’t a team.” Said Physics Teacher Ms.

Echols. In  the early days of frisbee at SLA, it was just a sport that teachers and students alike enjoyed play.
“A couple years after I got here some students expressed interest in having a team that plays games and tournaments and stuff like–we started playing some other schools in games and went to a tournament.”

After this first team was created, the following year the team expanded and had a girls and boys team. Both played a tournament. It was still co-ed because they still didn’t have enough players.

Starting the 2012-2013 school year, the team finally had enough players to have a boys and girls team. The girl’s team is in the spring and the boys teams are in the fall and spring. Also they have a JV and a varsity team.

“The team plays in the PADA league. It stands for Philadelphia Area Disc Alliance. That’s a league that runs all the adult leagues, and under that it has youth leagues. All of the teams in the Philadelphia area participate through them. They take care of all the insurance and other things that would come from the district. We’re totally separate from other school district sports”

Philadelphia has a tight knit ultimate network and plenty of teams to play like Caroll High School, who they just beat for their last game of the season.

“Lehmann has lofty aspirations for the team, which I think is great and is good for a lot of kids. He’s upped the level of intensity and made it a serious sport as SLA–that’s been good.

Senior Captain Rob Jenkins agrees that Lehmann has made the team more intense through his experience with coaching and more vigorous practices.

With the team coming off of a big win, they will continue to practice every morning at 6:30a for their spring season.