Hands down, without any competition, Laika entertainment Studios is the best in the movie making industry when it comes to producing stop-motion films. Artists at Laika work their gluteus maximus’ off modeling puppets, making individual faces for characters, and creating sets.

Even if the name doesn’t ring any bells, you’ve probably seen at least one of their feature films. whether it be the nightmare inducing Coraline, the surprisingly emotional ParaNorman, or the family-oriented Boxtrolls.

Now their newest film, Kubo and the Two Strings, has joined their ranks after five years of production.

And I have to say, it’s a pretty epic movie. 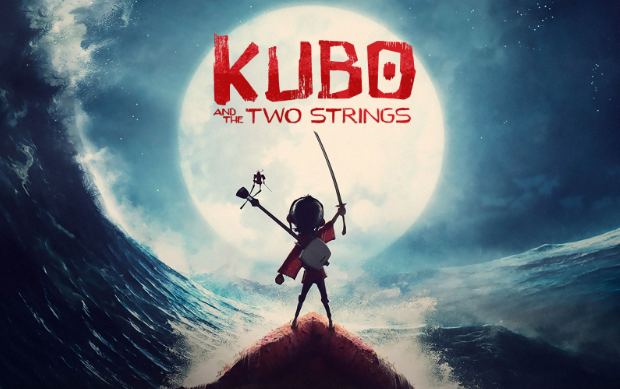 The story starts off intense; a full moon looms in a windy night sky as waves crash around a tiny, rickety boat. I was filled with anxiety as the boat comes into focus and I realized that it holds a mother and her infant child. It gets worse as a great wave curls onto the scene, ready to smash the tiny boat to bits, I thought I might have a heart attack.

Saraitu, the mother and a supporting character, manages to split the oncoming wave using a burst of magic played off a shamisen. For a brief moment, I was filled with pure relief as the wind stopped howling and the waves calmed.

Until I saw the massive tidal wave forming behind the boat, the one Saraitu couldn’t see. This one did hit the boat, smashed it to pieces, and left mother and child to the ferocity of the ocean.

They both manage to survive, by some luck of the universe, but just barely.

After nearly having a heart attack, passing out from relief, and having my heart split in half only to have it fixed again: I was hooked.

For the rest of the movie I watched eagerly as Kubo dutifully cared for his mother and told stories in his village to seek out a living, laughed at the endless banter between Monkey and Beetle, two supporting characters, and smiled when it was revealed how Sarai and her husband, Hanzo, fell in love.

Turns out they had tried to kill each other, though that didn’t take away from the romance.

The whole movie had me on an emotional rollercoaster, from laughing to crying to holding my breath over the wellbeing of a talking beetle.

Which is why I was so heartbroken when I learned my new favorite movie had been upstaged by a talking sausage that can’t go 5 minutes without cursing.

We have to support good storytelling and animation when it arises, otherwise we’ll be stuck watching the same CGI explosions and listening to the same profanity.