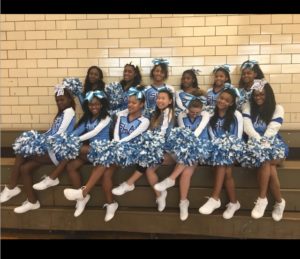 Many students don’t know this, but SLA has a cheerleading team.

The team was founded last year by SLA Beeber Athletic Director Melissa Lawson, The team is comprises students from both campuses, SLA at Beeber and SLA at Center City.

So, why don’t more students know about the team?

For one thing, more members of the team are from the Beeber campus, and their name is on the uniform. The team captains are Kiyannah McGee and Serenity Harris, led by coach Sherria Watts.They’re all from SLA  at Beeber.

They cheer at  to basketball games for both teams, which is sometimes can lead to confusion as the uniform says SLA Beeber rather than SLA Center City.

The team works well together, as Harris states: “I would say there’s a good environment. Before we all were a team, most of us didn’t really talk to each other, but the team brought us together. I think we work well together, things usually go smoothly.”

The Cheer captains encourage students from both campuses to join the team. s one of the captains, Serenity Harris, say: “I personally encourage people to join , it would bring the two campuses closer.”

Center City Junior Deja Harrison describes this sport as “competitive”: “It’s a competitive sport, because the goal is to lead the team to victory.”

Despite their enthusiasm, the team continues to be relatively unknown at the Center City Campus.

Some people think the team is only from Beeber, like Sophomore Kiah Johnson who explained: “I know there is a SLA Cheerleading Team, because a friend from SLA Beeber told me. “I thought the team was only from Beeber.”

History Teacher Daniel Symonds also had an incomplete understanding of the team.  “I know there’s a cheerleading team, I thought it was run  from Beeber, though. I knew of it because I heard it from students, maybe once.”

Many students, when interviewed, didn’t know about the team at all.  Spanish Teacher Melanie Manuel thought the team had been canceled: “I knew we did have a team, but didn’t know they still exist. They used to practice outside my classroom.”

Symonds also explained: “No central channel of communication for me to hear about it otherwise. Haven’t heard of students leaving early from class for it, either.”

Considering Should main office do something for it, like make more announcements as they do for other varsity teams?

Ms. Manuel didn’t think promoting the team was  the responsibility of the main office, but students felt otherwise.

The Policy of the Advisory Memo is that teachers or students in some cases give the information to Excellence Coordinator Jeremy Spry, and then he writes the memo.

A solution to this issue could be the communication of a student or the teacher, Ms. Watts, with Spry so he can include it in the memo and students in Center City would also be aware of the existence of this SLA Varsity team.