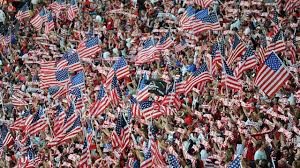 Regarding overall rankings, at the end of 2014, the USMNT ranked 27th in FIFA rankings and right now rank 29th. So this team is not horrible, but this is not the issue at hand. The USMNT have proven they can beat world class teams, for this summer they beat the defending World Cup Champion, Germany, by a score of 2-1 in a friendly. Of course a friendly does not mean much but this caught the eyes of many and earned the USMNT some deserved respect. So why, after all these good things being said, do the USMNT still have no chance of ever winning the World Cup? One reason, there are too many teams that are better.

In an interview with Tomy Fleurine, a die-hard Brazil National Men’s Soccer Team fanatic, he put his own intake on the USMNT chances.

“The USMNT winning a World Cup? Is that a trick question?” Mr. Fleurine said with a sly grin on his face, then added his reasoning.

“The USMNT will always be a good team, they will always make the World Cup or come very close, but they will never win the whole tournament. This simply being because there are too many better teams. You have Brazil, Argentina, Spain, Belgium, Germany, Portugal, Colombia, Wales, England, Chile. All top class soccer teams who could each win a World Cup. The USMNT would lose in a laugher to any of these teams. A good team is the USMNT, but they will never be good enough.”

There is just too much competition. It starts with rankings. Ranked 29th, which isn’t bad, but isn’t top class. There are 28 statistically better teams in the world, that is a lot of competition. Many of these teams the USMNT can indeed beat, however many will destroy the USMNT in a joke match.

Nevertheless the USMNT and the United States soccer world is filled with talented players. Players such as Gedion Zelalem, Deandre Yedlin, Gyasi Zardes, and Jordan Morris. All these prospects, along with numerous others, have potential to shine in the 2018 World Cup. With these great prospects, however come even better ones around the world. With Martin Odegaard, Hachim Mastour, Ulises Torres, Bilal Boutobba, and Tomas Conechny to name only a very few all are amazing players and will be great one day. The competition is too rough for America. The USMNT will always be a good team, they will most likely always make the World Cup, but they will never win the World Cup. The USMNT will never be good enough to win the World Cup.