High school is the ultimate obstacle for teenagers. When students enter through these doors, it is expected they will receive their fair share of drama, friendship and an immense amount of work that will haunt them throughout the next four years.

The latter applies directly to the community of SLA. Behind the amount of conversations you have over the internet and all the projects that were definitely not completed at the last minute, there is someone, or rather something that you owe it all to: your laptop.

We, teenagers, ages thirteen through eighteen, are as reckless as they come and it is not expected that we will suddenly be responsible, capable adults when an electronic device is trusted to them for the remainder of our time here.

Quite of few things can happen: You might tip a soda bottle in the direction of your keyboard, crack a screen after slamming your top-case a little too hard or even drop it on your very first day. While most of these incidents are preventable, the consequences of mistreated laptop are apparent by senior year.

Our laptops look and feel alienated from the rest of the school. To put this into perspective, recall the Pixar’s WALL-E. If you were to compare the aged trash compactor WALL-E to the much more sleek and fast, then you could get a glimpse of how bad they have it.

Senior Breeanna Noi had a good run with her Macbook. It was two months to prior May that the issues started to arise. She accidently spilled lemonade on her laptop during the busiest season of the quarter. “All the times I was forced to work on benchmarks and projects made me want to stay away from my computer,” said Noi.

Nearing the end of her high school career, she only had one comment to make about her computer. “I hate technology.”

Unlike Noi, Senior Alex Johnson had a different approach on laptops in general. “I don’t like Macs,” he admitted. “They have a very short life span. Plus, they’re outdated and have underpowered hardware, too.”

Johnson doesn’t bother bringing his Macbook to school anymore. He leaves it at home and does all his assignments on his own PC.

Very soon, seniors at Science Leadership Academy won’t have to worry about any heart wrenching trips to the Tech Lab, any benchmarks gone terribly wrong or the infamous spinning beach balls of doom.

The final Laptop Turn-In is right around the corner. Regardless of when students are graduating, we can all reminiscence on the first day we got our laptops, excited that we were to be apart of SLA’s culture and community. 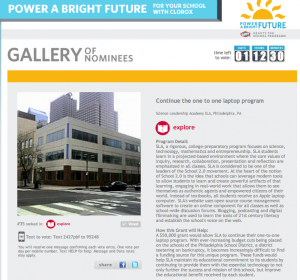 SLA currently stands in 35th place in the “Clorox Power Bright Future: Grants for School Programs” with just over a day left to vote.

The contest gives away 7 grants to aid school programs.

Over a five-week voting period teachers, parents and students watched SLA rise in the popular vote contest for the chance to win $50,000 to fund freshman laptops.

Voting online and through text message, Principal Lehmann made daily announcements over the PA system instructing students and teachers, “It’s that time again! Everybody take out your cell phone.”

SLA is entered in the Explore category with the other two categories being Create and Play. The program with the most popular vote overall wins the $50,000, while the popular winner in each category wins $25,000. Further, the judge’s panel at Clorox will pick an exemplary program from each category to win a $25,000 prize.

This is not the first time SLA has entered into contest for the chance to win big prize money. Fundraising efforts to continue the laptop program are a struggle every year.

Last school year, Principal Lehmann was voted a semi-finalist in the “2012 Elizabeth Rohatyn Prize for Schools Where Teaching Matters” where a school is awarded a one-time prize of $15,000.

The voting in the “Clorox Power Bright Future” contest ends on December 19, 2012 and the winners will be notified in January 2013.

Vote for nominees in the Power Bright Future contest here

This year, SLA has adopted a new system of distributing computer programs to student machines – and this system has many students confused.

In previous years, laptops would have all the needed applications installed when they were distributed to students on the first day of school. This year, students must look at a menu on Moodle, full of applications, and choose which ones to download.

This new procedure left many students wondering: why?

According to Technology Coordinator Marcie Hull, the change reflects evolving methods of sharing.

“A lot of people are migrating to cloud or mobile,” she said. Students need to “learn how to download those where you find them and then install them onto your computer. You get to make everything available and also tailor that machine to your use.”

The process of wiping and updating laptops is a yearly routine for tech coordinator Marcie Hull and her tech room assistants. Students may not realize it, but long hours are spent over the summer in the updating and reinstalling of each individual computer.

This year, to streamline the process, Ms. Hull tried something new by allowing students to get individual applications. “For now, some are online, and some are on a USB key,” she explained.

For students who need step-by-step instructions for downloading apps, check out this related Features Article.

Some students had problems with downloading, because some links didn’t work, or the downloads took hours.

Ms. Hull acknowledged that the servers were overloaded with so many students trying to download at once. “However,” she said, “there is a plan in effect to get a server built in SLA that students can connect to and download applications quickly.”

There is also now a divide between students who have the re-image and those who do not.
“Computers that lacked enough memory to be upgraded to OS X Mountain Lion stayed at the old image with Snow Leopard,” Ms. Hull explained, “because the new OS simply would not fit on the internal memory of the laptop.”

This divide disappointed some students. Junior Sara Nesbitt, whose laptop was not updated, says she’d rather be up to date with current technology.

“I like having some of the applications,” she said, “but I’d rather be up to date than have all the old applications.”

Possibly the biggest difference between those with the update is the disappearance of Microsoft products such as Word. It is neither included in the re-image nor the online distribution.

“We did not have a license for Microsoft Word, we never did. We were using it illegally… I didn’t know,” said Hull.

While this distribution process might be faster, it is not without it’s flaws.

“it’s good we don’t have all those unnecessary applications, it’s not wasting space” said Senior Marly Utzig. “But I don’t know what applications I need or what they do.”

Looking towards the future, Sophomores and Juniors may wonder whether this new process will become the norm.

While nothing is set in stone, Ms Hull has confirmed that it “is dependent upon what the freshmen laptops will be” next year.

When they got their laptops back this September, many students were surprised and confused by the new applications and lack of software. SLAMedia sat down with Technology Coordinator Marcie Hull to get the facts and reasonings behind the new procedure. To learn more about the change, check out the related News Article.

Jacob Lotkowski: Why did you decide to change the disk image?

Marcie Hull: If I privilege one person over another for what goes on the image, the Image would be too large to copy to 500 computers quickly. Also, I wanted kids to realize what is happening to inside their computers, and part of that is going out to the interwebs and getting things [applications] they want and loading them onto their computers… it’s a necessary thing for them to learn before they go to college.

JL: Were you in favor the the Google Drive Dashboard feature?

MH: Absolutely I am, I think there some kinks in it, and it will get better over time….People want something to work and be done with it, here. People forget we are like a teaching hospital, we are teaching teachers… we are first adopters of many things and we try them out here, to see if they can work in an educational setting.

JL: What is your favorite app on the downloads list?

MH: One that would be all encompassing and helpful for students would be Evernote, because you can put it on any device and there is a hard drive component and a web interface. It’s a smart, smart app.

JL: What would you like to tell people who want Word?

MH: It’s just as good as any word processor out there, and we don’t have a license for it so it would be illegal for me to distribute on computers without purchasing it. Pages is a wonderful word processor, but since we’re a Google Sites school we should be editing most of our work on Google Drive. [Using Google Drive] will result in less loss of data. I want to train people out of Microsoft Word.

JL: Are we going to get iLife?

MH: iLife is available now in Ms. Hull’s classroom on a thumb drive.

MH: I don’t have the disks, I’ve been looking for that disk for a year and a half, I’ll get around to it, but not before freshman laptops go out.

If you’re still lost, Here is SLAMedia’s guide to setting up your computer this year.

The easiest and most secure to download applications is through the Mac App Store. The advantage of this is that all the apps you download are free of viruses and malware, and will be easier to update, through OSX’s built-in software update.